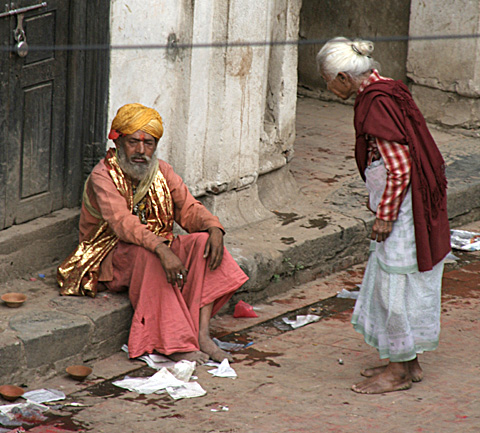 After food last night Sam went back to the hotel while I prowled around central Bhaktapur taking some night shots around the city. It gave me a chance to climb the tallest temple (not just in Kathmandu Valley, but in the whole of Nepal).

This morning we went for breakfast at the same cafe overlooking the square before making our way over to the national galleries. For the small charge of 20 Rupees (small even by Nepali standards) we were able to view the woodworking, brass and art galleries. The first two were pretty insignificant – most things were labelled 20th century with no description in very dimly lit alcoves and glass cases on the top floor of an old Newari-style building. The art gallery was considerably better, but was lacking in power, so with just a mini-maglite torch for light the guards let us wander around the darkened corridors and rooms of mostly religious paintings.

We came back to the hotel to checkout, but were distracted by an art shop and then the final stages of the chariot pulling which has been going on for five days now. After an almighty tug, something came loose and the whole monster vehicle overwhelmed the people trying to pull it along and it shot out of view in the opposite direction.

We decided we really had to make a move, and we didn’t particularly fancy staying around for the final part of the festival which involves hurling rocks. There were no fatalities last year, but the year before three people were eliminated by this rather dangerous tradition.

We caught a local bus back to Thamel and spent the afternoon shopping for bargains and sorting out the next few days activities. We also made a visit to the artist who painted some of the work which we saw earlier in Bhaktapur. He was incredibly friendly and we stayed for chia until heading back to the markets to sort out the last of the pre-Tibet purchases.

Tomorrow we head out to Nepaltaar and Gabisar to visit Sam’s host family and then the orphanage.

This post was first published on Wed Apr 18 2007 originally on justbeyondthebridge.co.uk, my former personal blog