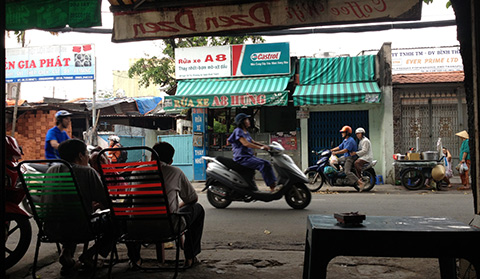 The night before I departed Nadi for the final time I dropped a quick Facebook message to an old school friend who lives in Kowloon and might be open to catching up for a couple of hours while I was in transit.

I checked my luggage right through to Ho Chi Minh and so was able to dive out of the airport at around 2pm just in time to grab a few hours here, and be treated to some of the finest food in the city.

Oli was a couple of years below me at school and we shared an interest in electronics and digital stuff, so although he now works in recruitment, conversation naturally gravitated back to tech over dinner.

Having suffered a diet of airline food for 10 hours, Oli was quite keen to ensure I try some seasonal local delicacies, and as I was quite happy to do it in style, so we managed to track down a place that was serving whole crab and roe, and had an enjoyable time breaking the delicious white meat out of the shells and making a general mess of the place.

It was a short and enjoyable diversion. It's definitely nice to know people in far flung places.

And so, back on a plane.

Having travelled to South East Asia a handful of times before, it still sometimes surprises me that I've never made it to Vietnam before, especially since it's often considered such an integral part of the circuit out there.

Just as I boarded the flight from Hong Kong, I happened to re-read a text message from George about pickup from the airport. He'd said Monday. But before I had time to digest this fully, I had been press-ganged through the boarding gate, and it wasn't until mid-flight that it occurred to me that I was actually due to land on Sunday.

I walked out of the doors of the airport with a sense of trepidation, and deservedly so, as George was nowhere in sight. It was 1am now, and I quickly came to a decision that I was going to have to resort to a hotel for the evening. Unfortunately, with no way of reaching George, no guidebook and no idea what the currency exchange rates are, I had to 'trust' the ever-so-eager taxi drivers to let me know what an acceptable rate would be. I knew I was being fleeced, but there was so very little I could do about it.

Actually it worked out ok the end. The driver picked a good, comfortable hotel with free wi-fi, and I was able to quickly fire out a SOS message to George by email. What was frustrating though was in my exhaustion, I had paid little attention to the fact reception had retained my passport when I'd handed it over willingly, and only the next morning when I went to retrieve it, discovered someone had removed the £20 emergency note that I leave tucked into the cover. But if that's the worst thing that happened to me on the whole trip, then I won't complain wildly.

I was awoken by the shrill ring of my hotel telephone. It was about 6.30am, and it was George, who was incredibly apologetic and already standing in reception. Luckily for him, I forgave him (well, I needed somewhere to stay!), and we went off to grab breakfast. I also know he won't get to live this down :)

One of the best things about Asia is getting breakfast.

I love a good English fry up, or a continental spread, but to be honest the asian attempts at this are usually barbaric (not for want of trying, but carrots with a fry up? No, no, no.) and you are far better off going for something that the locals would eat, and this generally means something you would never get at home.

We slipped into the open-fronted cafe between the low trestle tables and the small polyprop stools, and perched up against a couple of Vietnamese strangers who were already slurping down their morning fix. A watery savoury soup, the noodles and beef add substance, a squeeze of lime for a little acidity, and a handful of torn-up deep-fried spongy croutons for texture. You grab a handful of leaves and bean-sprouts from the plate served with the meal, tear them up, sprinkle them in, then mix. Alongside this a whole raw egg, cracked into a smaller, saltier broth. To drink, a glass tumbler of weak iced-tea (served everywhere, with everything). Excellent, refreshing.

And then my first true experience of what is a staple of Vietnamese existence - cafe dá. A long coffee drink, served over crushed ice and if your teeth can take it, with a huge dollop of sweet, creamy, thick condensed milk stirred in.

The bitter Viet coffee needs extra sweetness to make it palatable. We whiled away an hour or so in the coffee shop; a dark shoebox of a room comprised of row upon row of plastic deck chairs, arranged in pairs to face out onto a busy scooter-laden thoroughfare.

Despite the rush of the traffic passing in front of us, the actual pace of life in Vietnam appears to be languid, and this was one happy oasis from the chaos outside.

But it wasn't long before we were sucked into the whirlwind motorcade as George and I jumped on the bike (a slightly worn, but beautiful black and chrome 1967 Honda with a deep tiger purr) and weaved our way through to the central Bentham Market where we were cajoled and pleaded with by plucky marketeers until it was time for another break.

At this new (slightly more upmarket) café we met Ian and Kevin, drank fresh coconuts and went for lunch in what was becoming oppressive humidity.

Jet-lag was now definitely kicking in, and it was clear I needed some downtime. We bartered with a handful of shop owners in light drizzle before whizzing home with with my new fold-out camp bed which lodged neatly between me and George on the bike and which completely obscured any view of the road ahead.

After a rest, and now dark, we sat under a bulb pocked canvas canopy surrounded by card players and beer swilling teenagers. Another cafe dá. We watched a man on the river bank unsuccessfully try to liberate his fishing rod from the tree he had just caught. A kitten played, well - cat and mouse - with a very large rat in the gutter in front of us. We were feeling hungry again.

The best dinner nearby, if you ask George, is the BBQ chicken place just down the way from his house, and so that's where we walked to.

Silver trestle tables stumble over the concrete pavement - wonky platforms for bowls of chicken parts and wobbly bottles of ice-soaked Saigon Red, the beer of choice around here. We were propped on a particularly wonky bit, and spent a good hour trying out the variety of delights on offer.

Duck tongue is a new one on me. A tough, shark-tooth of meat with what appears to be a wishbone inside, but which you can liberate by pinching the end between your teeth and stretching it away while holding the ends of the forked bone.

Chicken feet, better than I remember last time I had them, perhaps because these seemed to have a little more meat on them. Chicken hearts (you really should try them if you haven't - they are also a Brazilian delicacy) - fantastically muscly meat and very rich with flavour. And all of the above marinaded in a thick asian BBQ sauce.

The next day, George taught me just enough Vietnamese to order black iced coffees to go (which worked, but which the waitress found highly entertaining) and we jumped on the river hydrofoil to Vũng Tàu.

As the ferry approached the river delta and the South China Sea opens up in front of you, the influence of big money here is clear. Huge oil derricks and tankers are moored (or scuttled) off the coast, yet the town itself feels quite westernised, and caters for many of the Russian and European engineers who live here and work on the rigs.

Georges' parents have a house here, and we spent a one night here. Scooting up to the highest point on the island, then running back down in time for the first homemade western food in weeks (a fantastic lasagne) we headed out for drinks.

The first stop was a funny little bar, "The Black Pearl". We watched with some amusement as it took three waiters to pour each beer - one to open the can, one to pour, and one to hold the torch (well, it was quite dark). Did I mention all the staff are dressed as pirates? Well, it was very novel, but we didn't stay very long.

We left to meet with Hung, Alex and Alex's girlfriend (whose name I will not attempt to spell at risk of getting it very wrong). Alex is a repatriated American-Vietnamese, a result of the exodus of south-Vietnamese to the States, and also George's language teacher. Hung is a friend who studied in the same class.

Playing pool appeared to have become the social activity of choice for this group, and that is exactly how we went from sober to drunk that evening.

After a few beers, we were persuaded that we should stop for a late night street snack. "Sweet Soup" is a colourful milky drink packed with slithers of nut, jelly cubes, jackfruit, lychee and crushed ice that you sup from a handled beer glass. Once finished we headed back to Alex's and played an addictive and massively popular Vietnamese card game while wolfing down chunks of duck smothered in a sweet sauce into the very early hours.