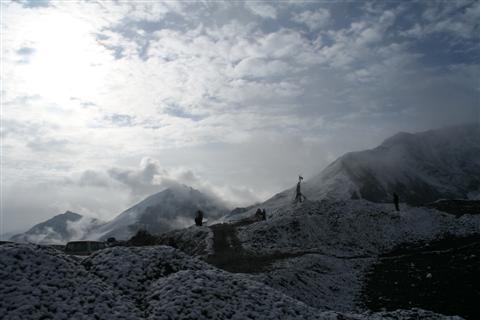 Tibet’s capital city, Lhasa is actually one of the lowest points we have been for the past few days.

Like everywhere in Tibet, there is a strong Chinese influence in the architecture, but more-so here than out in the country and up on the plateau from where we have come from.

Last night we found a great place for Yak burgers before turning in early at our nice, but very cold hotel. This morning we had to be leaving by 7am to get on the road up to the lakes and after our driver finally turned up (half an hour late) the convoy of 11 land cruisers moved off.

It was more beautiful snow-capped mountain scenery, and after some initial cloud and snow, the skies cleared and we stopped at several lakes and viewpoints along the eight-hour journey to the capital.

The driver was passing out tsampa barley the whole journey (to eat like popcorn), and making the most of his newest toy. Our driver has pretty much pimped out the jeep to look like a police car – we have blue and red flashing lights on the bull-bars and his newest addition – a siren and PA through the horn to make announcements to fellow drivers. We probably have the coolest driver.

The hotel tonight has hot water and so I managed to get a bath in – the first wash in three days. Some of the girls have been going spare (not from our group though – we don’t grumble as much as some people). Each move makes the group anticipate the next set of a facilities, as so far standards have been very basic. Getting out of bed at 2am in sub-5-degree temperatures, treading on icy floors and to go and relieve yourself outside makes you learn how to hold it in for a few hours longer.

Headaches from altitude are all but gone and we’re going to the Potala tomorrow.

This post was first published on Tue Apr 24 2007 originally on justbeyondthebridge.co.uk, my former personal blog