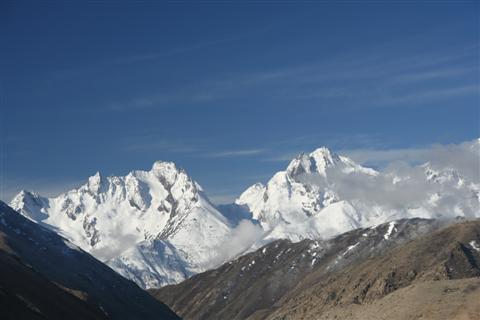 We set of early Saturday morning at 5.30am, taking the long drive back out towards Last Resort where we had rafted the day before.

After a brief stop when the other bus managed to get a puncture, we made it to the Tibetan border, the ‘friendship bridge’ and got our passports checked and temperatures measured (SARS is still a concern) before being herded into Toyota Land Crusiers to take the hazardous mountain pass and start gaining real altitude (ours houses Jen, Matt, Sam and myself with a driver who speaks no English and only has one cassette which happens to be particularly awful Chinese techno music).

By this time the clear weather had faded and it was really bucketing it down. In one of the breaks at customs we made our way into a small kitchen and all ordered large bowls of noodles until the convoy was ready to move off.

Immediately the change of country is noticeable. The first thing is the language – no one out of the fifty of us here speaks any Manderin, and certainly not any Tibetan, so meal times are often complicated as simple gesturing seems to confuse more than compound.

We arrived in Nagalam late evening, by which time it was freezing cold. Tibet really is basic; the charpies (asian toilets) are no more than a hole over a pit, and there is no warm water or heating. Thick Yak blankets are very effective though, but didn’t do much to calm the AMS (acute mountain sickness), which gives you a bad headache, make your drowsy or dizzy and affect breathing.

Paracetamol is staple of our diet at the moment.

Still, the views are stunning. We rose early yesterday to see the huge snow-capped mountains and a clear blue sky above us, perfect weather for seeing the Himalaya. We bundled back into the 4×4s and made our way several hundred km across the vast plateaus and over the passes stopping for photographs and food.

Our final travel stop was at a small restaurant (in the most basic sense of the word) overlooking Mt Everest. It’s hard to put across how spectacular the views are generally, and as soon as I get to a place where they allow you to plug in your camera, I’ll put some photos up.

Last night we stayed in dormitories again – primitive once more, but we got to hustle some street-pool with the local kids which was enjoyable.

Today we have arrived in Xingtze (?) where we are now have showers and western toilets. One of the vehicles rolled off the road this morning; thankfully no one was hurt, but it did bring about how desolate this place is and it was good we were all still close together as the distance between seeing people and their Yaks is vast.

We have picked up a few Tibetan phrases. Hello is ‘Tashi Delli’ while our driver told us dog is ‘key’, goat is ‘ra’, cat is ‘shimmi’ and yak is ‘ya’. We are becoming pros.

This afternoon we explored the local monastery, the traditional seat of the Panchen Lama. We then browsed the local area, shared some card tricks and generally did non-energetic things to avoid bringing on the AMS any heavier.

This post was first published on Mon Apr 23 2007 originally on justbeyondthebridge.co.uk, my former personal blog