Journey into Africa: Into Malawi 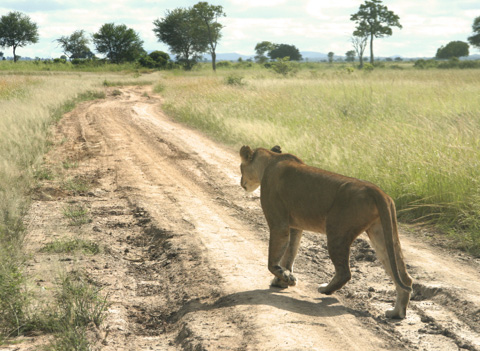 Mikumi National Park is split by a single lane main road that provides excellent easy game viewing for the observant. Unfortunately the fact that herds of wild animals freely roam from one side to the other doesn't deter the menace of the high speed trucks. The danger is for both driver and animal, as it isn't unheard of them running into elephants at a pace.

Thankfully we were able to make our journey at a more leisurely pace, and arrived close to sunset as the air was cooling and their was a greater likelihood of spotting game than under the beating heat of the midday sun.

We were lucky. Both that evening and the following morning on a the three hour sunrise game drive through the park, we spotted scores of spritely fawn-coloured impalas, warthogs, wildebeest, buffalo and then even more impressively, elephants, giraffes, hippos, zebras and then most fantastically of all - a pride of lions.

We'd had to make little effort to find any of them, but I'd been careful to lower my expectations that we might ever be lucky enough to spot a lion or leopard as I know others who have spent longer in Africa and never seen either. But as we moved through one of the grassy plains, we spotted the rising backs of four sandy cats.

It soon became clear what they were and as the lead truck we were in prime position to get the best view. They began to cross in front of the car, and Rich did his best to move the vehicle far enough forward to keep edging the lions ahead of us. It was utterly incredible as they were less than a meter from the right side of the truck, and after they made eye contact, we made a decision to wind up the windows...

Although glancing up occasionally to give an acid look, they had no intention of making way for our elephant sized truck, and continued to paw slowly across the road in before finally disappearing under the bushes to our left and out of sight.

Whilst we were camping, food was always prepared on a rota, and for accommodation, an option of ground or roof tents on the vehicles. Our starts were usually before sunrise in order to keep out of the worst of the heat, and to also to make as much a progress as possible bearing in mind that delays seemed to be par for the course.

Following the exceptional experience of the game drive, we hit the road once more and drove to our next destination in Tanzania - Kisalansa via Iringa . Ryan and I had been tasked with the evening meal which we prepared under the headlights of one of the trucks and to a refined soundtrack provided by Mike - a selection of Elgar and most likely the most civilised camping experience of all of time. Later that evening a few of us retreated indoors to a mud shack snug for a final Tangawizi (a local sweet ginger beer) before bed.

Next we travelled through Mbeya to our next camp, which also housed a rough school house. We were loaned the use of the school's projector for the evening, so threw on a film to dodge the occasional showers of rain.

The next morning brought an unwanted surprise - one of the Land Cruisers wouldn't start and it looked like we were going to have to tow it to the border. Thankfully it turned out we were able to jump the auxiliary battery and get underway.

Customs was the usual mix of form filling and photographs, but we sorted the carnets (an FiA document required for the transport of vehicles over borders), made it over the border and arrived at our first Malawian camp that evening - the stunning Nkhata Bay.

This post was first published on Mon Jun 10 2013 originally on justbeyondthebridge.co.uk, my former personal blog