Journey into Africa: The Rugby 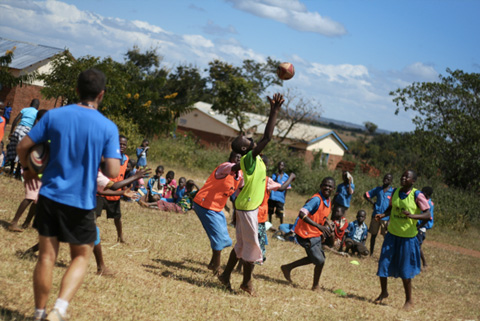 That Monday was the first real day on the core project. We were working with 300 kids from two primary schools, one of which the expedition had visited the previous year, and one new to the project; they were Mngwangwa and Mzumanzi.

The setup is as follows; the seven expedition coaches are split between the two schools, and the kids (an equal mix of boys and girls) and staff usually have no prior experience with the sport. The aim is that over the course of five days they are trained up on basic ball skills which eventually progresses to an understanding of touch rugby. On the final day of the week we fix up a tournament between the two schools.

Additionally, the team leaves behind balls, markers and teaching resources - with the hope that the newly trained staff enable the school to continue playing once the expedition has moved on. The bigger aim is to bring the game into communities in countries in Africa where there is limited or no existing access to the sport.

Football is by far the most popular sport in these countries, but excludes girls and is often the only option. The Rugby in Africa expedition programme helps the kids develop skills such as sportsmanship and teamwork, and collaborations with local and international businesses also allow them to deliver an effective general health and security awareness scheme at the same time.

The bumpy ride out on Monday morning started at 6am, and we had to pick up Wordsworth - our man on the ground - and Jean - one of the sports teachers - en route.

The cityscape fades away towards the outskirts of Lilongwe, and the roads quickly break down into pure dust tracks that divide the vast fields of maize and tobacco. It's a novelty for trucks to be seen out there, and whilst many of locals just stare, the kids would enthusiastically wave or chase the vehicles as we passed.

Around an hour of suspension-battering driving later, and we would reach the schools, separated from each other by 7km. The headmaster at Mzumanzi was a jolly, sixty year old fellow in green felt suit. He was called Axwell. We had to engage him for his help almost immediately when - against our express plea that we didn’t want to do anything to disrupt lessons - he accidentally dismissed the whole school for the day.

Curious visitors with colourful trucks and strange sports were clearly a huge distraction, and by 8am a tide of kids was washing over the school pitch. There should have been around 50 children with us, but by this stage there were well over 1000.

With a little persuasion from the teachers and some effective chasing away, the pitch was finally cleared, and the sessions could begin in earnest.

We spent the next three days at these schools, and I flitted between the two with Rich. Down at Mgongwe, things seemed to be less chaotic and this perhaps was in part down to the headmaster actively joining in the learning and teaching of the game. Teaching coaches how to coach a game they’ve never played before, while actively coaching the kids, is never going to be really simple task but progress seemed to be good regardless.

To give some idea of the environment we were in, each school comprised of a series of crude tin-roofed long houses; sometimes plastered, sometimes not. A sandy red grove filled with stupid goats filled the space between the various buildings; tufts of brush were growing here and there, and on the edges of the school grounds, bright green and yellow cassia trees bloom brightly.

Each school hut is divided so it forms two square rooms, and has a entrance at each end with steep double step to get up to the open doorway (I presume to keep the stupid goats out, and rainwater).

Inside the temperature is significantly cooler - surprisingly so - but the gloom inside was brightened by the reflection of sunlight that floods through the pierced brick 'windows' onto the yellowed plasterwork.

Blackboards were painted onto one wall of each classroom, and thirty or so bench desks packed as far back into the room as possible. Average class sizes here are around 120 kids, and the classroom no larger than any you'd find in the UK.

But for all the dilapidation, the places are dry, simple and quite beautiful in the morning sunlight. Some buildings are in greater need of attention than others, and the open grounds and incredible settings (the playing field had 360 views with no sign of civilisation at all) are an enviable asset.

That first afternoon Rich and I had a meeting with the local office of G4S, and this was my first chance to meet the key project contacts. Lilongwe's office is somewhat of an outpost, and we all shuffled around a single office desk in order to discuss progress and what would be expected in the week ahead.

Most of those in attendance were local staff, however we were also joined by an ex-pat director, and Maryka, our main contact from the head office in South Africa.

Wordsworth also arranged for us to meet the District Education Manager, who's office is reached by navigating a labyrinth of corridors in a bungalow office block, filled alternately by teetering piles of thin brown folders and administrators perched on school desks between towers of unfiled papers. He was happy to hear of our progress (he had been involved last year also) and made provision to come along and watch the festivities planned on the Friday.

Our final stop of the day was to meet Serge and Dave, two brothers who own the largest ISP in Malawi and supporters of the project. They are also thoroughly nice guys, and when Rich and I popped by just briefly for introductions, they insisted we joined them and their kids for a drink and a tour of their adjoining houses.

This post was first published on Tue Jun 11 2013 originally on justbeyondthebridge.co.uk, my former personal blog