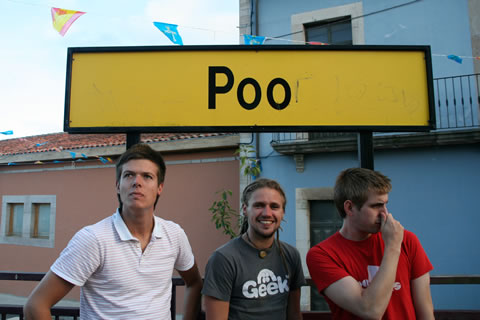 A week away in Spain last week was very much deserved; a chance for some respite and to catch some rays after our miserably wet summer. I went about this with gusto and torched my chest on the first day. Result.

Despite the pain, Sean, Ryan and myself set about the Asturian town of Gijon (North West Spain) and found ourselves wallowing in seafood and the local cider, which is poured from a height and swilled down quickly. We even managed to fit in some beach prowling, tapas chewing and an eventful Iberian musical experience (which included beer, The Go! Team, a bull fighting ring and some early morning violence).

In the second half of the week we stayed with Ryan's girlfriend Aihnoa at her family's holiday home further along the coast in Llanes (neighbouring the town of Poo). More seafood, more cider, drinking games with the locals, a failure to grasp the language and some swimming in the sea later, and the holiday was over very quickly and I spent a further four hours in the car driving back from Essex.

It was all suitably fantastic.

This post was first published on Sun Aug 31 2008 originally on justbeyondthebridge.co.uk, my former personal blog