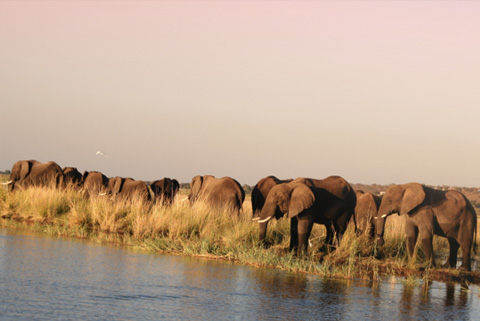 The following day we arrived at the Chobe River. This waterway is the dividing line between Namibia and Botswana and that evening we took a river safari for the first time.

I don’t know what my expectations were, and the waterborne journey started slowly. There was quite a lot of urbanisation along the banks and the initial thirty minutes (plus a delay waiting for passengers) meant that I was not sure how successful it would turn out, however I am pleased to say it turned out to exceed all my expectations.

Of course being on the water at sunset on effectively an open platform sounds good to me anyway, and part of it is the luck of what animals you encounter, but as soon as we had cleared the more developed part of the riverbank we came across some really beautiful sights.

Hippos basked on the mudbanks just below the surface of the water, and this allowed us to get relatively close without being a danger to them. We also saw the largest number of crocodiles I’d seen anywhere, and some of the largest by far.

The greatest sight however was the elephants. A large group were making the crossing from the one country to the other, and being able to observe seven or eight elephants swimming the half a kilometre distance, then emerge occasionally to traverse the grassy mudbanks in the centre of the river was absolutely spectacular. At one stage the whole troupe lined up as they edged their way along one bank and allowed us to get a photograph of them all trunk to tail in the waxing sunlight. It was really magnificent, and made up massively for how ill I was actually feeling underneath it all!

We crossed into Zambia by the Kazungula ferry which sits at the intersection of Botswana, Namibia, Zimbabwe and Zambia, and made our way directly to Livingstone. I saw a sign here that I can only assume was mis-painted. It read, “Please do not give arms to the small children”. I’m pretty sure that meant “alms”, but either way, it’s irresponsible.

This post was first published on Fri Jun 14 2013 originally on justbeyondthebridge.co.uk, my former personal blog