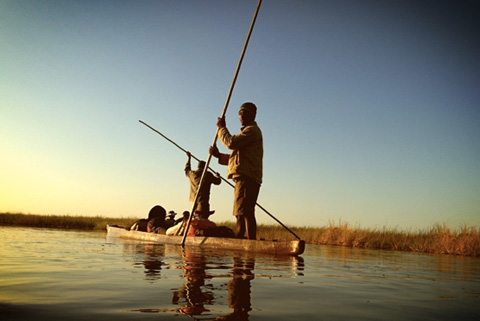 That night I disturbed briefly by splashing noises just a few meters from our tent. It transpired in the morning that there were hippos nearby who had been in the water, a pretty incredible thing, but thankfully they hadn’t been too intrigued by our camp.

We were chauffeured back through the streams of the delta after breakfast and said goodbye to our pollers. One curious thing I picked up from my time in east Africa is the handshake that if you don’t come prepared for can catch you off guard. Ten days in Tanzania and Malawi had made me quite accustomed to it, but the effective difference is that once you have shaken ‘western style’, you then pivot your thumb upwards, shake again in this new clasp, then go back for a second western shake. I am terrible at executing this stuff normally, but after meeting with quite a few locals it became second nature and I could even do it whilst keeping eye contact (the sign of a pro). I’ve yet to confuse any Brummies with it however.

Another quirk of moving around in Africa is that I quickly came to understand that geographical boundaries rarely meant much for the ethnic makeup of the country. For example, most of Malawi is populated by two tribes - both of whom originate from the Congo. The semi-nomadic Massi who are cattle herding specialists and famously continue to wear their traditional clothing (it’s a bit of an anachronism in much of what I saw of urban Africa) are spread mainly between Kenya and Tanzania, and from what I am told, wearing full garb and a pair of Kayne style white slatted sunglasses on the dancefloors of the clubs of Lilongwe, absolutely clean up with the ladies.

It also means the languages change very quickly, and over the course of three weeks I had to pick up very basic bits of Swahili, Chichewa, Afrikaans and Setswana.

Although not exactly revelatory, it turns out all the characters in legendary Disney movie The Lion King are just called by their Swahilian names - for example Simba literally translates to lion, Pumba meaning warthog etc. I also realised that “Asante Sana! Squashed Banana!” means “Thanks for the squashed banana!”, but I’m still struggling to absorb the full cultural impact of this.

Unfortunately this day marked a bit of a low point in my trip. That evening we stayed at a campsite filled with Boabab trees - ancient specimens that can be up to 6,000 years old - but I had started to develop a neckache and I realised my balance was off. It was compounded after I accidentally kicked a rock and sliced open my big toe which left wonderfully rich pools of blood across the campsite.

It didn’t ruin my evening, but I wasn’t feeling well and for the next two or three days I felt like I was in some kind of bubble, and I had to resort to doing things at a snails pace. It wasn’t particularly pleasant.

This post was first published on Fri Jun 14 2013 originally on justbeyondthebridge.co.uk, my former personal blog