Journey into Africa: First Taste of the Continent 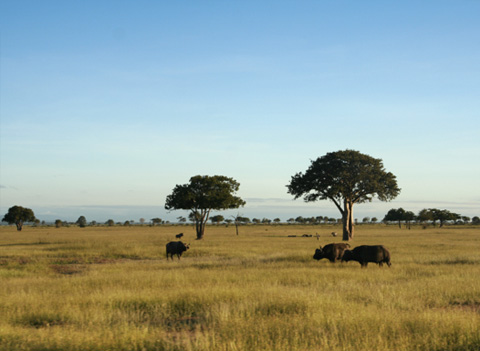 In the 10 days travelling with the Bhubesi Pride, we would be covering 1700 kilometres in the three Land Cruisers, taking us down from Tanzania into and through the narrow strip of country that borders the western side of Lake Nyasa, Malawi.

One assumption I had made about Africa for many years was that it is an incredibly barren, sandy place. This very general view was eventually upturned when a good friend of mine who worked in Uganda showed me photographs, and I was simply dumbfounded to discover how lush parts of the place actually are.

My personal experience of the continent was similar. Great rich earthy trails of red, amber and ochre form streaks across huge plains of deep green foliage and scrubland. Huge white outcrops soar up through groves of yellow-pocked acacia trees, chunky bare-trunked baobabs and the fluttering sprouts of the banana plants.

Blade-like roads slice directly through villages where bright white eyes peer out from under the leafy shade of communal trees, and terracotta coloured, tin-roofed houses are lined up like matchboxes to each side of the varying qualities of tarmac - which range from rough to barely present.

Massive sapphire blue skies roll out in every direction and form a huge canopy over endless miles of fields of yellow and green, full of towering sunflowers, maize and tobacco.

Occasionally the road opens up just enough to pack in a market; stuffed with roughly stacked palm baskets brimming with odd pairs of shoes, coloured fabrics and bric-a-brac. From amongst the metal stalls, squads of primary school children stare open mouthed (or while chewing languidly on leek-like sticks of sugar cane) calling out "wazungu" at us as we pass by in our convoy of 4x4s. (Note: the nickname wazungu or mzunga is not a particularly acceptable one, yet seemed to be widely used wherever we went. It literally translates as white skin.)

Roughly cut hot potato slices bubble in oily circular stoves, and are handed out like goldfish in translucent green polythene bags for just a few shillings (Tanzania) or qwatcha (Malawi).

In Malawi, each small village contains without fail a set of buildings daubed either red or white and lime; the stalls operated by the two main competing phone network brands.

Tanzania's roads are blighted by two major pests; the thundering trucks who bolt past with little regard for speed limits or any level of self maintenance (most crawl sideways as the wheel tracking is so horrendously far out) and secondly the 'hairdryer' (speed gun) equipped police who vigorously enforce speed restrictions and tax infractions on anyone who looks like they would be prepared to pay the fine.

There is quite a clear problem with corruption here. In the first three or four days of travel alone we were stopped over a dozen times by the fluorescent-coated police patrols that block the roads at regular intervals across all major routes, and who in various ways tried to levy all manner of spurious fines upon us. Rich prides himself in having never having to have paid a single one - most can be made to go away with a friendly handshake and a smile, begging forgiveness or simply arguing the point forcibly. Whether anyone has ever actually been fined for committing a genuine crime remains an enigma.

Other roadside decorations include piles of thick rubber belts that once were lorry tyres that have been abandoned where they exploded. Quite commonly the side or backend of a jackknifed truck juts up from a ditch or from the trees that line the roads.

Hoards of young traders flock at the intersections of large towns and cities, carrying crates of glass bottled soft drinks or corn cobs skewered on the end of long sticks so that truck drivers can pluck them up from within their cab, and drop their coins into the open palms below.

Between each village, bicycles and pedestrians border the thoroughfares and women stack huge loads upon their heads - fruits, foods, parcels and most extraordinarily of all, huge lengths of rough cut timber.

This post was first published on Sun Jun 09 2013 originally on justbeyondthebridge.co.uk, my former personal blog