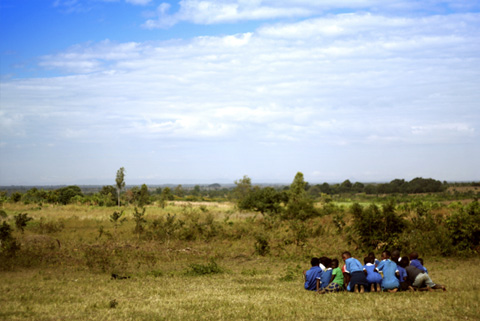 That evening we went out for team curry, but on our return journey our taxi driver (who had been playing a risky game with his petrol gauge on the outbound journey) predictably ran out of fuel halfway up a hill, in pitch black downtown Lilongwe.

Ryan, Mike, Jon and I were desperate to get the car to the garage at the summit of the hill as quickly as we could - pushing it onwards - but unfortunately the sound of laughter roared past from the second taxi as the rest of our party gloated past us before we could get the evidence off the road.

On the next evening, we had been invited to join the recently reformed Lilongwe Rugby Club for a game of touch rugby, followed by an invitation for later in the evening to attend the Tamarind Club BBQ at the British High Commission. In crumpled shirts and smart shoes, we found ourselves in the secure compound, standing poolside, drinking free (French?) beer and enjoying platters of grilled meat. Quite bizarre and a significant contrast to much of the rest of our experience in Lilongwe, but an interesting evening.

And so rolled around my final full day with the expedition. Wednesday.

The progress at the schools had been good, and the kids seemed to be still glowing with enthusiasm for the opportunity to play. Some of the coaches had started to earn their stripes (a tangerine coach’s t-shirt) and crowd control seemed to no longer an issue.

G4S had been supplying refreshments each day, but there was an almighty cheer of delight when, to the surprise of everyone, Maryke appeared with a waterbutt of squash balanced on her head in the traditional African manner.

Each child received a plastic cup of the drink and a pack of biscuits at the end of their session each day. They queued silently in line to wash their hands under a stream of water poured from the butt, then they would hold their empty cup in the bowl of their one hand, ready for it to be filled up. They’d then take their biscuits with their other hand, and without fail, place the packet in their pocket for later. I have no idea why this was the case, but they were all incredibly disciplined about it and I didn’t see any great rush to eat them there and then.

That final evening Serge arranged a special meal for us at a restaurant called Buchannan's where he kindly picked up the tab. It was the first time we had a chance to ask questions about the state of the country and discuss the place, and it proved to be especially interesting to hear about the recent Madonna debacle and the politics of the place.

The next morning, Rich and I enjoyed a late and lazy Thursday breakfast at Mabuya Camp before departing for the airport. Tanzania and Malawi had been enjoyable new experiences - and the latter of the two has made a significant impact on me. The long expanses of time on the road gave me time to forge a series of new friendships with the expedition team (JP, Ryan, Ben, Jon, Guilliame, Dave and Mike) as well as getting to encounter some absolutely incredible wildlife.

But the most significant impact was being able to be part of the Rugby in Africa project, which in turn allowed me to witness the bizarre mix of sheer beauty and absolute poverty of rural Malawi, whilst yet also witnessing the a bunch of incredibly joyous kids embracing a brand new sport.

This post was first published on Tue Jun 11 2013 originally on justbeyondthebridge.co.uk, my former personal blog