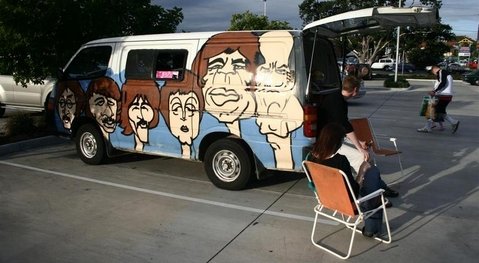 Just after we were thinking that we might have to pay for another night's accommodation in Brisbane, Andrew turned up on the scene and we spent the evening wallowing in his apartment with a few bottles of red wine. The next morning we were up and off to pick up our van, Eric. Eric has an interesting paint-job, not everyone in Brisbane drives around with the Beatles, Mick Jagger & Keith Richardson, Jimmy Hendrix, GW Bush, Dick Cheney, Osama Bin Laden, Ozzy Osbourne and some other bloke we can't work out plastered over their vehicle exterior. Photos will follow.

We headed out of town and up the coast to Hervey Bay, where we ate firstly in an Aldi car park, then in a car park by the beach, then after being moved by security, in a campsite this morning. A fast dash around the coastal regions this morning (chasing ferries, all departing for Fraser Island) finally meant we got onto a boat and made it onto a fast-track tour for the afternoon. The island is beautiful, made entirely of sand, the 90km+ beach plays host to a range of natural attractions, as well as serving as a highway for the island's traffic. After a swim in a rainwater lake we headed back to the mainland and are now getting ready for the second night's heavy driving up towards the Whitsundays. Time is now of the essence.

This post was first published on Wed Jul 05 2006 originally on justbeyondthebridge.co.uk, my former personal blog