This article was written 6 years ago in 2014, so I ask you not to judge the writing of my youth too harshly! The text is as it was originally published. 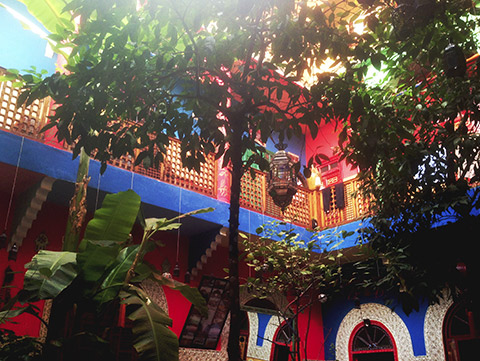 The taxi driver rolled the tops of his ears between his thumbs and forefingers before returning both hands to the wheel of the car. We had given him an additional 50 dimah to expedite our departure (he had been waiting for a second passenger to ‘fill up’ the front passenger seat). I had to lean forward for the duration of the journey, since there isn’t room for four adult shoulders abreast in the back seat, even in a big Mercedes saloon. The Moroccan couple next to us chatted happily together for the whole two hours.

We drove through the red walls of Marrakech just as night was setting in. Clusters of orange street lanterns suspend from wrought iron spears and make the high city walls glow amber, while fluorescent neon tubes saturate the stacks of tins, clothing, cooking pots, wedding decorations, nuts and spices spilling out of the souks and market stalls.

The city was warm, and smelt of horses, rich stewing lamb and roasting hot spices.

Ben had already stayed here before and recommended a riad where we could be accommodated, as well as a place to go and eat something that night.

We crossed the busy main square and passed through the crowds; glowing stalls, performers, preachers, dancers and stall-owners vied for space and attention. Eventually the three of us slipped through to the back of a restaurant in a darker, less busy part of the square and scaled the steps at the back until we emerged on an open-air terrace with a clear view over the whole melee.

We ate bread, spiced olives, sweet salads, thinly sliced oiled peppers, and tried avocado juice (mixed with milk, and surprisingly sweet). The minarets started up before our main courses could arrive, and the sound temporarily overwhelmed the perpetual beat of the music and percussion from the swell of the crowds below.

We talked some local politics and about the language. Whereas James and I relied on pigeon French to get by until now, Ben had studied Arabic usefully both understood and spoke it, which was gleefully received by all the various locals we came into contact with. The food here was great.

Our riad was a curious traditional Moroccan structure, with central courtyard, which was completely impossible to locate and even harder to figure out from its bland, pink shell. It’s heavy timber door separated the world from the bright, colourful courtyard which contained a mosaiced pool, a veranda on the first floor, and a retractable canopy which floated high up above a collection of palms and lanterns. Small birds scavenged for crumbs in the rugs whilst thin cats slept in the plant pots. The building was topped off with a terrace, but James and my legs ached so much we decided to stick to the lower floors for the remainder of our remaining stay.

People lazed on the futons around the babbling pool, and others slept in the bunked dormitories in the rooms around it. It was full of a quiet chatter; Arabic, French, English – but we didn’t notice, as we were all soon very fast asleep.

The next morning was the start our final day. Apart from nipping out for some final lunch with Ben – and admiring a suitcase of footwear that one of our dorm mates had bought at a snip in the souk – we didn’t do too much of anything before our flight that evening. Morocco had been excellent, if not supremely exhausting. It had been a very good week.