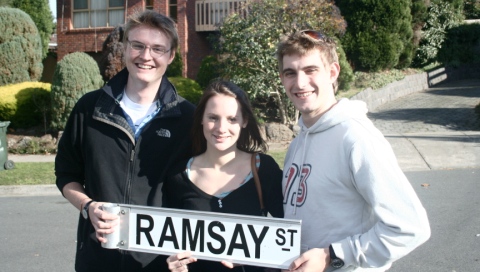 There is nothing quite as touristy as driving through the suburbs of Melbourne in a bus with Harold Bishop painted on the side in the search of all things Ramsay St. James, Heather and myself got ourselves up early this morning (despite a slightly drunken evening) in order to catch the official Neighbours tour and do a bit of celebrity stalking. Despite the early promise of a sighting of one of the stars, sitting outside the studios for half an hour failed to yield any results, so we were driven to Erinsbrugh (Sp?) High School for the obligatory photos before moving onto the famous but surprisingly short street. Plenty of photos, plenty of plot spoilers. All good fun, although a little disappointed we didn't get a photo with Steph.

The afternoon brought the arrival of Andrew who flew in from Brisbane. We took lunch at some street cafe that reminded me of Italy more than eastern Australia before jumping on a free shuttle and browsing around the town. Heather headed back to send some critical emails and do some shopping, while James, Andrew and I took a long (long, long) walk to a beach on the far side of the city. After working up a considerable thirst, we thought it was only appropriate to have a few refreshments and to sample some of the local cuisine (at a very nice restaurant) before heading back via tram.

Tonight we're back in the bar under the hostel. It's impressive considering the usual state of hostel bars, although we have become somewhat sceptical of anything that is advertised as 'free' here, finding that all the offers in the bar, hostel and in fact most of Melbourne are a little misleading. Tomorrow we take the great coastal drive, but for now it's another night sampling the local brews...

This post was first published on Wed Jun 21 2006 originally on justbeyondthebridge.co.uk, my former personal blog