On a boat to Tangier

This article was written 6 years ago in 2014, so I ask you not to judge the writing of my youth too harshly! The text is as it was originally published. 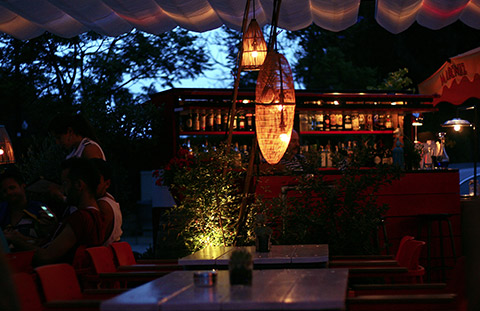 We slunk into a couple of cheap plastic chairs flecked around the royal-blue deck of the M/V Ikarus Palace. I bit into a warm chocolate-stuffed croissant, and greased it down with the thick black ooze of a North African espresso. This is obviously the best kind of breakfast for an increasingly late and hot morning on the Mediterranean sea.

No trace remained of our tempestuous departure; the blankets of shattering white light and thunder claps beating our retreat from Barcelona faded out at some point in the small hours of Sunday night, and pools of mild rainwater that had slip-slopped across the deck had all now washed their way overboard.

The journey had begun two days earlier with a muggy dash to Waterbeach train station at 5am. Neither James or I had planned on starting the trip with a sprint, but we miscalculated our start time, and spent the journey into Kings Cross trying to recover from it.

This was my first time on the Eurostar. Having been a jet-setting pharmacist/politico for the past five years, this was all very normal for James, but I enjoyed the novelty of seeing the channel tunnel for myself, and enjoying the opportunity to award it my own, personal approval.

We shared our compartment with a pair of beautiful plummy Chelsea girls, swollen with style and sophistication, but who snoozed through most of the journey open-mouthed like flu-y pugs.

Paris arrived around noon, and we looped around Notre Dame at speed. It was Saturday afternoon and the crowds flocked over the squares and hot pavements between the booksellers and stalls packed full of cheap prints and ancient pornography.

It would have been ideal to see The Tower and some more of the city, but a strict timetable dictated a 2.05pm departure from Gare de Lyon, and so with this constraint, we dashed down our provençal baguettes under the analogue clack of the station departures board.

The train journey to Barcelona took six hours. We met Jenny and Paul who whisked us off to a small restaurant in the labyrinthine streets of Raval, and filled us with raw cod, steak, fried whole-fish, garlic pasta and vast plate of vanilla ice cream smothered in whipped cream.

Having exceeded ourselves on food, we nipped into the “fish shop”. This small, tiled bar packs it’s half dozen customers in like sardines, and then soaks them in a variety of flavoursome gin and tonics until they are fully steeped and decide to go home.

It was around 11am the next morning that we began to treat our hazy heads. I stuck my face though our sixth floor window and soaked up the breeze and pavement cafe chatter that filtered up through the autumn colours. Our hosts prepared breakfast, and fried up a slab of potato tortilla, scarlet chorizo and sliced mushrooms. We flushed this down with a pot of hot tea and left for the day’s activities.

Our first destination was Sagrada Familia, Gaudi’s as yet unfinished masterpiece. I can’t think of another place with a more extraordinary interior, and use of light and space. The canopy of tree like columns, soaring voids and glowing windows are from science fiction, and to understand that any building in the modern age should need over a century to construct helps underscore the parallel with the bizarrely monumental achievements of medieval cathedral builders even by modern standards.

We found a small leafy courtyard for lunch, and spent the afternoon weaving the streets of Gothic, Born and Los Ramblas. In the evening, at the top of the hill that holds the Olympic Park, we drank olive-studded vermouth and watched the sun set over the port.

Jenny and Paul had suggested we try out a new type of tapas for our final meal that evening. These substantial, cocktail stick-mounted snacks from the Basque are laid out on slices of crusty bread, and have to be picked out like a buffet from between the shoulders of fellow dinners who sit along the long bar. Called “pinchos”, you might find your snack layered up with stuffed peppers, tuna, raw fish, olives, sausage, hams, cream cheese, beef patties, thickly sliced brie or other goodies. Each pincho costs a euro and the waitress simply counts the number of sticks you gorged through at the end of your meal before politely pushing out the door… there is no room for hangers-on and non-diners in a packed pincho bar.

We checked-in with our ferry just before the heavens opened. I had been responsible for the accommodation and was pleased to find our twin berth cabin with porthole was remarkably large and comfortable. We hung around on the deck until the orange glow of Barcelona faded away, and retired to bed.

Even with a thick espresso and thicker chocolate croissant, standing in line to complete the customs paperwork we were expected to complete on deck eight (the “Disco Deck”) that morning had proved an challenge in itself.

When we finally reached the front of the queue, it instantly became apparent that we had been waiting for an hour in the wrong line. The customs officer looked quite surprised that under ‘vehicle registration’ (admittedly requested in Arabic and French only) we had apparently attempted to register the whole boat. It was now quite obvious from his expression; this was incorrect.

Otherwise, the azure-wrapped day passed smoothly, and we found shelter from the sun under the steps of the upper deck. We ate a lunch and a supper in the canteen and arrived in Tangier at 11am the following day.

By early afternoon it became apparent that the passing mules and I were not getting on. A terribly apologetic Berber tried to console me when one of his decided to crush me against a rock.

We arrived at the refuge at 3700m in the early evening. This alpine-style ‘hut’ is palatial in dimensions, yet inside almost completely dark inside for the whole day. The electricity and lighting is turned on for three hours in the evening after the sun sets. We sat for a hearty evening meal with a bundle of French, German and Austrians and wolfed through bowls of hot soup and cascading piles of cheese and tomato spaghetti.

At 6am we rose. The hut was pitch black. We met an American called Ben at the breakfast table, and we agreed to climb the remainder of the mountain with him.

By 7am we were ready and wrapped up; we started the ascent. From the back of the refuge the valley rises in two main peaks, and we scaled the boulders to the left hand side of the pass – rapidly rising through mounds of rocky skree – and passing a number of groups who had set off a little before us.

The high altitude thins the air here, and with each step higher new energy is needed to take in enough oxygen. Only once before have I been to this height, in the Himalayas, and I suffered from the sickness: headaches, dizziness and shortness of breath. This time I fared much better, perhaps due to a better breathing technique, however I was really pleased to avoid my once troublesome asthma and avoided the need of an inhaler for the entire journey – there and back.

By this time of year the caps of the Atlas ranges have no snow, but the biting wind races across the skree in unpredictable, frozen bursts. Ice lays on the ground in places, and the overall temperature with windchill was around 2 degrees.

At midway, we started to pass some early starters already returning from the summit. Soon after we reached the middle of the two peaks at the top of the valley, and for the first time our view was expanded; the world fell away below our feet and spanned out like a pale blue sheet over the rippling earth below us.

We made a final push. The path wound back and forth, eventually flattening out and atop it a large triangular structure marked the spot; the top.

There were photos and hand shaking all round, and it was time to go back down.

The descent was less fun. The sharp drops between steps jarred at our legs, and the skree slipped away as you stood on it. By the time of our return to the refuge, my knees were like jelly and our progress had slowed the whole time. We slunk into the chairs of the hut’s dark hall and devoured another tagine.

The return journey was hard underfoot – but nourished by food, or initial pace was fast. James endured a knee injury and we slowed again as the path continued to descend harshly. We shared a mint tea at a settlement at the foot of the valley. Ben needed to return to Marrakesh, and so we agreed to share a grand taxi back from Imlil.