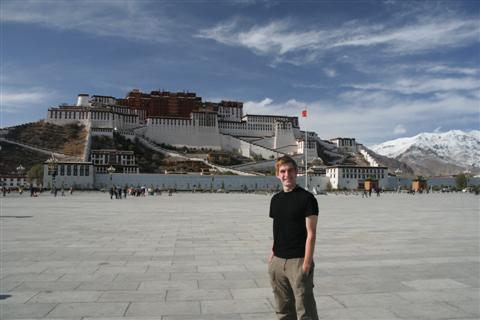 I’m in a cafe that resembles a Starbucks – an unusual find in Tibet which is mostly full of noodle houses and yak butter tea cafes.

Lhasa is very Chinese in look and feel, and after writing the last entry we headed over the road for some noodles. We were starving, and so went into the first place we found which was an unusually posh and large Chinese restaurant. The four of us herded ourselves over to a table in the vast eating room and quickly noticed we were the only people in there, except for the staff. And there were a hell of a lot of staff.

The far wall was a glass construction allowing us to view directly what the 15 chefs were up to. 15 chefs all washing down the huge panes and stainless steel surfaces until they all stopped to watch the strange group of foreigners sit down and ask for the menu.

It soon became apparent that none of the 10 waiting staff could speak any english, and even when they wheeled out a reluctant girl from the back, the best we could get was a string of apologies, “Sorry, so sorry.”

It became even more difficult when we started to try to explain what we wanted. The number of staff had now increased further, all wanting a look at their new patrons, but as equally as confused as to what was meant to be going on. Our food descriptions (four chow mein) didn’t seem to work, and we nearly resorted to drawing things before they whisked the menus away, claiming they now knew what we wanted.

Three minutes later a waiter re-appeared and summoned me into the glass-fronted kitchen. Clearly the kitchen staff were even more amazed when I entered, where I discovered another pocket of four or five waiters who were just sitting and talking. I was shown a washed and peeled potato, and although my knowledge of Chinese cuisine is not the greatest, I assumed they hadn’t understood the noodle request. I said “chips”, they said “yes”, I said “no; four chow mein”, they said “ah, ok, sorry, sorry”, and back I went.

And amongst a whole lot of laughter and misunderstanding, the 14 chefs produced four small bowls of noodles.

The next day we visited the Potala. Despite forgetting our passports, they let us in for a 1 hour express tour of the Dalai Lama’s former residence. Poor weather made it a bit drab, but after visiting the Sera monastery (the monks who discovered the Dalai Lama) we went back to take photos in the square when the clouds had cleared and there was a clear view of the mountains.

This morning was a similar start, this time off to the Dreupang Monastary, one of largest in Tibet. Once home to 7,700 monks, it now has just 700. After some sightseeing, photos and souvenir shopping we were taken back to the old town.

This afternoon is the last here in Tibet. There is loads to write up in full at a later time, but that will have to wait until I am back in Kathmandu tomorrow.

This post was first published on Fri Apr 27 2007 originally on justbeyondthebridge.co.uk, my former personal blog