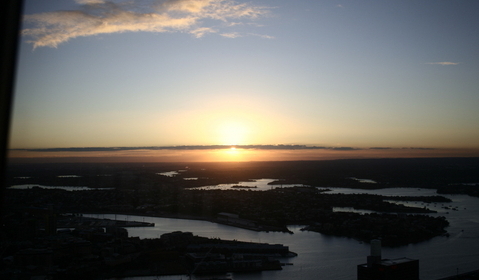 Yesterday morning started with toast and coffee and a train to the Opera House. We decided that walking around the outside was just not good enough, and so decided to satisfy our urge to see inside by taking an hour long tour around the building (which is in fact three separate structures). We had hoped to book tickets to see Romeo and Juliet, but unfortunately it had been sold out, so we took the recommendation of the woman in the box office and purchased three seats for 'an acclaimed American Jazz Band' that evening in the main hall.

We came back up from the quayside and back inside the Sydney Tower to buy tickets for the lifts. James opted to stay inside, but Heather and I decided to don what only can be equated to Bananaman's idea of pyjamas (a bold yellow and blue jumpsuit), hook ourselves onto a rail on a rubber band and walk around the top edge of the building. It was cool, and the weather was good, although the hype would have you believe there might be an element of fear in standing 250m above Sydney. This was not the case. I've encountered fluffy toys that are more scary than the Skywalk, and to make things worse they parade to the front of the lifts queues through the starring crowds who say things like "Look at the banana people over there.". Captain Planet would have been proud.

After our epic journey (spent mostly in the ever-slow lifts) we came back to the hostel, whipped on some smart stuff, picked up Peel (one of Heather's new Danish friends) and went back over to the Opera House for the performance. Not quite what we were expecting, the jazz band turned out to be a symphony orchestra who played two jazz numbers at the end (The St. Louis Oboubia???). The opening band had been the most impressive; a Singaporean primary school band (ages 8-12) who managed to make my one school appearance playing The Toreador on a recorder sound pathetic.

We went for a beer (or two) and crashed. Australia lost last night I assume, but the papers are all but vague about it. They aren't mentioning the score anywhere.

Today we're off on a mystery road trip to the Blue Mountains (a 'Heatha-adventure'), as the tour bus failed to show this morning, so we're hiring a car.

This post was first published on Tue Jun 27 2006 originally on justbeyondthebridge.co.uk, my former personal blog