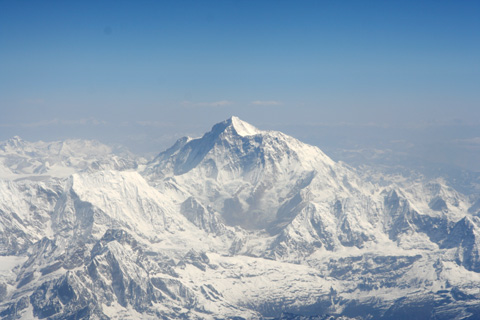 Last night was the finishing party in Lhasa. Guy, our resident Buddhist Israeli and all around character had booked out the top floor of somerestaurant in the old town. The afternoon before was spent walking around the Jokhang and exploring the markets stalls of the eager vendors before taking a long sit and reminisce in the little coffee shop until 8.30pm.

About thirty five of the forty five on the tour turned up and there was drinking and dancing and cards (playing some ridiculous rules) which went on until the early hours of the morning. There was plenty of fun.

Unfortunately there were two upsets on the last day – one being that Sonya lost her entire travel documents and monies in the back of a cab and Nicholas was mugged (although not hurt) near the Potala.

This morning was a 5.30 start again, this time a trip to the airport. The flight takes you back to Kathmandu over the lofty peaks of the Himalaya and very close to Everest so you can have a good look.

Despite asking the lady at check-in for a seat on the right hand side of the plane with a window, she put me on bog-duty and so sat on the last seat of the plane in the aisle. Brilliant.

It didn’t matter in the end as no one else sat next to me so I shifted over to the window seat and as Matt had the same setup the other side I was able to get a good view of the mountains as we passed.

I also managed to get a Chinese (Tibetan) stamp in my passport (they don’t usually do this).

At the far end, I was able to whistle through customs, but everyone else got held up due to the visa regulations and it took about an hour and a half to get sorted fully before catching a (free) taxi back to the Potala Guesthouse in Thamel.

Tomorrow we go to Chitwan national park for safaris and the like.

I am so fed up of Yak with everything.

This post was first published on Sat Apr 28 2007 originally on justbeyondthebridge.co.uk, my former personal blog