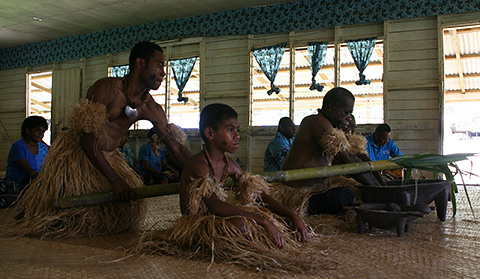 (This is the first of four entries charting my recent time away. I broke it up to make them a bit more digestible…)

With October rolling around once more, I once again found myself caught up in the pursuit of exotic passport stamps, new flavours and bizarrely disorientating timezones.

This year I was determined to win back some of the sunshine that has so effectively continued to evade me in recent years and so this time bet on a dead cert. After mulling over the possibilities of South Africa, returning to South America et al, I eventually plumped for the sun-bleached coral shores of Fiji, followed by a short stint in Vietnam that would punctuate the return journey.

Both places are new dog-ears to my atlas, but as ever there was some more subtle logic to my choices beyond the chance of fine weather.

Fiji would be an opportunity to experience first hand some locations of historical importance to me, as well as a chance to wallow in warm seas.

As for Vietnam, seven months ago my friend George moved out to South East Asia, and so the second part of my journey was to provide a relaxing antidote to the machinations of island hopping; a time to catch up, remeniss, and see what Ho Chi Minh City has to offer.

And so I departed England in fair weather, early October, and made my way to Nadi on Fiji's largest island, Viti Levu.

The final few minutes of the flight gave us a clear view of the hazy mountains that fill out the centre of this large island. Stepping into the terminal, I was greeted with the first taste of the famous Fijian hospitality - a live band performing traditional welcome (Bula!) songs and the distribution cowrie shell garlands for all of us new arrivals.

As becomes quickly apparent to any traveller in Fiji, time spent in Nadi tends to be out of necessity rather than an undying passion. I spent my first night in the Nadi Bay Resort hotel but besides saying the food here was excellent, and that I had to reside here twice more during my time in Fiji, the place was not otherwise of huge significance.

I had once more elected to travel in the company of strangers, and the dawn of day two began with all the introductions. The trip was to be stewarded by Cam, our Fijian guide on Viti Levu, Asiri our driver, and the group itself comprised of just a handful of folk - Michelle, Tini, Esther, Julie and myself - a diverse spread of Europeans and antipodean types.

The first four days were spent on the road; hopping around the island, starting on the West, pausing each night in turn in the South, East and North before returning to Nadi on the final day.

Over the coming days, we were to try our hand at dune sand-boarding (great fun, quite exhausting), sunrise stalking (unsuccessful), mangrove-swamp boating (exhilarating) and kava drinking (more on this later).

Viti Levu is not a giant place, nor does it tend to garner the same flocks of sun-poached tourists that cluster on the Yasawas islands (a destination I reached later on the trip). It is home to lush vegetation, much sugar production, and as a consequence, gallons of a 60% proof sweet, dark rum called 'Bounty'.

One of the first activities we participated in while on Viti Levu was a trek along a thick, gluttonous mud trail. It led to the site of a waterfall in deep forest, where we all took it in turns to fling ourselves from a seven metre high outcrop of rocks above the swirling plunge-pool. I've previously been reticent to take part in throwing myself off things in the past, but there are times to conquer your demons, and this was one of them.

Accommodation in Fiji is pretty consistent - dormitories are the standard fare for most travellers and so each evening there was new bunk to negotiate as we slunk from resort to resort. All were very comfy, so I had no complaints and slept well. Even if you aren't a fan of that arrangement, waking up to a breakfast of fresh watermelon, pineapple, syrupy pancakes and hot tea is always an excellent compensation.

Talking of food, it was plentiful and fresh everywhere. Over the two weeks we became accustomed to 'wahoo', a meaty, almost chicken-like fish which is served in various ways, the abundant use of spinach, as well as a whole selection of other world foods served with their own Fijian twist.

Kokoda is one popular Fijian bowl served pretty much everywhere, but after seeing the many regretful expressions of fellow travellers mid-eat, I decided to stay away from this cold fish served in coconut and clung to the huge list of other far more appetising offers. An acquired taste, apparently.

However the most memorable culinary experience during my whole trip was on day three.

October 10th is Fiji Independence Day, and Cam was determined that we'd celebrate appropriately. Told to dress in blue clothing, we briefly called through Suva (Fiji's capital) that morning (catching the annual military tattoo), then donned a "sula" each (a traditional sarong) and headed for the hill village of Nasautoka.

Fijian custom dictates that when you intend to set foot upon land that is not your own that you must formally request permission, and as we were playing this by the book, it quickly became apparent that as the only male in the group that it would fall to me to act as 'chief' in this set piece.

Bound to accept my fate, not much later I found myself sat cross-legged at the front of a the village hall, side by side with the 86 year old Chief of this village, presiding over a ceremony mostly carried out in the native Fijian tongue and involving a whole panoply of subtle customs I no doubt infringed upon in the most revolting Western way. Thankfully, Chief was very forgiving of my amateurish ways, and we were very warmly welcomed in.

The room this all took place in was a big and airy single story building on stilts. The timber-slatted walls were blue-washed and glowed in dappled sunshine diffusing through the white cotton curtains.Bare floorboards were roughly swathed in large hemp and palm rugs that the assembled crowds sat upon, and in the middle sat a large, squat bowl primed for mixing the welcome 'kava' - a muddy, mildly anaesthetic drink created by crushing a locally-grown dried bush root into water stored in huge bamboo pipes.

Aside from our group, there must have been 30 or so people in the hut for the ceremony. The Chief of course, three traditionally dressed gents (sat behind the bowl opposite us and responsible for the practical bits of brewing kava), and then a large choir of women and children who sang for us. Like any raw vocal performance, there is something really stirring about the sound; one of those ones where you feel the bristling of the hair on the back of your neck.

There was however a slight issue for me to confront, and a direct consequence of having to sit cross-legged for so long.

Since the point where we had initially sat, introduced ourselves, donated gifts, participated in the ceremony (which involved clapping, drinking the muddy and sacred 'kava' water and shouting "Bula!" quite a lot), I had forgotten quite how bad the pins and needles in my legs had been in first 10 minutes I had sat on the floor. But they eventually had just faded out of my focus.

Invited by my counterpart chief to be the first to stand and shake the hands of each person in the room, I can only imagine the panic I managed to cause in the first person as they watched my tottering figure lurch towards them and then around the room on bandy legs as the blood surged back through my pegs for the first time in half an hour. I tried to disguise it, but I'm pretty sure most people thought that kava had gone to my head.

We were led shoeless down a mud track to the river that snakes it's way past the village, and invited by the local kids to engage in a spot of traditional bamboo river rafting.

The long, thin constructions are very simple, and comprise of six or seven thick bamboos, each three yards long and lashed together to create a flat floating platform just a foot and a half wide.

I was handed a further bamboo as means of propulsion, but it wasn't too long before my fellow (10 year old) rower decided to ditch the raft all together and went for a swim. At this point, I took his lead and within seconds pretty much everyone was left pratting about in the warm shallows until food was ready.

Back in the hut, spinach was order of the day. Cooked seven ways, we gorged ourselves on plates stacked high with food. It's the first time I've eaten a truly 'messy' meal (fingers only) since India, but there is something incredibly good fun about scooping up and moulding balls of soft, gluttonous pulps in your finger tips, peeling away the shells of fresh shrimp and chowing on fingertip-scoopfuls of boiled water ferns.

It was highly enjoyable, even if I couldn't manage it all. We finished up with a final bowl of kava and departed.

And that was that. The first stage of my Fijian adventure ended here, and after four days travelling together as a group we all went our separate ways - most of us heading away from Viti Levu and North through the the cluster of populated islands that spread through the South Pacific.