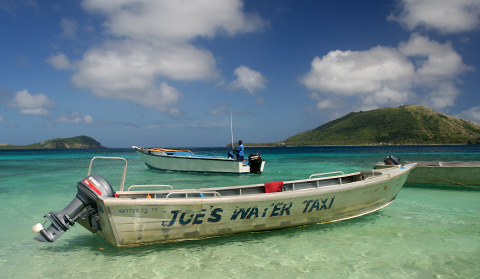 A large yellow catamaran know as the Yasawa Flyer snakes it's way between the various atolls and lagoons each day, making one full round trip that takes around 10 hours to complete.

As it goes it picks up and drops off travellers at the many Fijian resorts, but the sheer number of potential destinations means you never really leave the boat with more than a handful of other people - just enough to fill a single resort launch which all expectantly float just off their respective beaches, and draw up alongside the ferry at each stopping point like hungry pond fish waiting for a pensioner with a loaf to show up.

For my first stop I was alone. Two nights at the self-proclaimed 'party island', Beachcomber, which exists as a beautiful white beach that rings a rough clutch of lush green palms and a handful of of wooden bures (dorms) peeping through the foliage with deep black eyes.

The Rough Guide describes Beachcomber as having "lost some of the glitter from the disco ball" in recent years, and without wanting to be overly critical, it did feel more like Phoenix Nights than an experience at the Haçienda. The dorm is a massive affair, sleeping over 200 and actually very comfortable but there we no where near that number of occupants there when I arrived, and despite promises that it would get livelier at the weekend, that never actually came to pass.

With all the good weather, my pale British limbs were now on full show. In addition to board shorts and flip flops, I did keep my torso covered up in an attempt to ease myself into the searing 30ºC+heat, but after relaxing my own rules on the second afternoon I successfully managed to burn my back almost immediately, causing me to revert back to t-shirts post-haste. Dang.

The beauty of the place itself was unfaultable. Crystalline azure waters rush towards you from the horizon, and then seep into sheets of rippling cream under the glassy waters. The sand finally climbs from under the frothing sea as piping-hot slopes of fine ivory dust. Tall-masted sailing boats are occasionally set into this azure jelly - moored at arms length from the sprawling corals - and the only sound are from the regular rolling curls of breaking waves, or the occasional putt-putt of a small snorkelling launch. It's pretty incredible.

On Friday night I ended up getting drunk with some new friends; what started as a few beers soon descended into vodbulls and table-dancing. It was a very funny night.

Day two however was by comparison, dead, and I felt bad that Tini (who had just joined me from a night on an island that sounded incredible) was not going to have her first experiences matched here. We drank, played pool, went to bed.

The next day we left Beachcomber together, but our paths were diverging once more. I was off to Mantaray Island of which I knew very little.

I have to admit, at this point I was unsure whether these islands were going to be a success. My first encounter with the tropical island paradise, although beautiful, had disappointed me a little beyond the warmth of the sun and the swimming. The snorkelling had been relatively good, but not exceptional but this was clearly down to the endless poor policing of people standing on it, which I found was pretty dispiriting.

Thankfully, Mantaray Island is everything that Beachcomber is not.

In beautiful blue seas, the colourful launch pulled up onto the beach of this new island, and as is custom pretty much everywhere here, we were greeted by the staff band and customary yelp of Bula!

It quickly became apparent that I was also not going to be entirely alone on the island - it had completely escaped my memory that Michelle and Karen from the Viti Levu leg of my trip were already on this island and there was a full day's overlap in our stay.

This turned out to be a great asset, as we immediately went for lunch and I was introduced to a whole table of people with whom I quickly got to know, and this meant I now knew quite a lot of the present residents and the quirks of the place before my stay truly began.

Another major bonus was that within minutes of disembarking the boat, we were introduced to Joe, the dive shop owner who explained that should we want to learn to dive, that this was an excellent spot for it and that there was a considerable discount on the normal rate as an incentive to do so.

For those who know my ambitions, diving has been on my list of things to do for a very long while, however I have had somewhat bad luck attempting to get the opportunity to try it on at least two separate occasions.

This time I was determined however, and I am pleased that I grasped the opportunity with both hands. The only trade off was that the three days here at Mantaray would most likely be spent underwater and revising for the test at the end, but it was small price to pay for learning to dive at an utterly fantastic spot.

We got to dive six times in total. Where usually you need to first spend time in a pool, that stage is eschewed in favour of doing the early stage stuff directly in the sea, and if the thought of diving had scared any of the class beforehand, observing white-tipped sharks, eels and and plenty of other sea life on our first descent must have managed to knock the fear out of all of them. Unsurprisingly, I fell in love with it immediately.

During the few days I had on Mantaray, I got to watch the sunset from the summit of the island (the view was excellent...), and on day two I found myself playing the world's messiest drinking game. I cannot remember the last time I lost clothing permanently in a game of cards, but needless to say this was one funny evening.

Such is the life of a castaway that between the hours spent hooked up to a scuba tank, I was able to indulge in blissful beach life, and over my time on the islands managed to slide my way through three full books. After my failure to get through T.E. Lawrence's "Seven Pillars" last year, I set myself easier goals and instead polished off 37 Signal's 'Rework', Malcolm Gladwell's 'Tipping Point' and one more by the chap who did the one on coffee cup economics and whose name briefly escapes me.

Needless to say I found the whole experience on Mantaray wholly enjoyable, and so was somewhat sad to depart. I came to meet and know a whole host of good folk from both diving and otherwise - Ed, Claire, Katie, Helen, Claudia, Sal, Jay, Jenni, Darren, Hanna, Ruud, Jezte, Thomas etc etc. I also was extremely privileged to be treated to a special reading of extracts of "Fifty Shades" by the two Irish girls which was thoroughly entertaining.

Alas, the weather turned sour for the morning of our departure, and so the choir and guitarists performing the usual departure song stood huddled under the bar awning in pouring rain rather than stood out on the baking sands as they normally would prefer to do.

However, the rain was temporary and by the time the Yasawa Flyer had reached our destination the skies were once again azure, and the seas crystalline.

The island is known by visitors as The Blue Lagoon, taking it's name from the film of the same name which was shot nearby (and also to some degree probably because it is at the site of a blue lagoon…).

This was yet another idyllic slice of paradise. The huge curve of white sands bank around a glossy shallow pool of sand and beautiful corals. The seascape here provided the best snorkelling yet, but unfortunately also the best sunburn, and I ended up back in my t-shirt again.

Food at the Blue Lagoon had been bigged-up by pretty much every traveller we ran into before we arrived, and it didn't disappoint. Huge bowls of fish moray, freshly cooked shrimp, fish goujons, wahoo and garlicky mussels greeted us for our first night's dinner.

Tini had rejoined me for the final leg of my island stay, and we quickly made friends with Liz, Till, Kieron and Laura with whom we formed a team and unsuccessfully competed for the "Survivor" trophy organised by the resort. Throwing things through holes is a skill I have clearly neglected to nurture in recent years.

The final excursion we made was on the morning of departure, and we headed out by boat to the Sawa-i-Lau limestone caves on a neighbouring island.

The caves are flooded with seawater (when the tide is high) and freshwater (when low) and the first in the series is open to the skies, providing a cool pool of dark, clear water to wallow in.

The second cave takes a little bravery - a metre dive down, and two metre dive through an concealed underwater entrance and into the sulphuric air of a network of entirely sealed caves. This feels incredibly Indiana Jones, and even more so when you are shown the mysterious ancient wall markings, recorded in some long-lost language.

But this final excursion was the marker that my time in Fiji was drawing to a close. I'd thoroughly enjoyed island life, and none of the concerns about boredom had been realised (people before I went had indicated that might be a possibility). I was very content with the whole experience. Perhaps if I was to do it again I might have considered swapping my nights at Beachcomber with one other island, but all in all, that's not a real regret. I really recommend the Fijian experience.