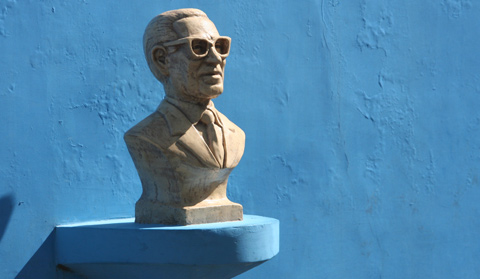 Inevitably, my summer travels this year became somewhat a last minute affair. Originally I’d planned to make a beeline for Cuba (the thought of sitting on a veranda, with a thick-rolled cigar in one hand and an ice-stacked rum glass in the other appealed greatly) but apparently this time of year can be a bit “typhoon-y” and I’d had my fill of cold and dull weather on my adventures abroad in the past two years.

I was lusting for some sunshine. Despite my acquiring of a tan generally follows a period of burning then peels away like snake skin before I’ve stepped off the plane home, I do enjoy sun drenched countries, and apart from the odd wedding in Spain I’ve not been anywhere really hot since 2007.

So it was decided. South America.

This is quite a big deal for me as it was and is the ‘Elderado’ continent that got me interested in visiting far flung parts of the world in the first place, and a location I had never seriously planned to go to until I had enough time to tackle it properly.

My limited trip this year hasn’t shattered those ambitions. In fact, having just three weeks there, I’m still bound to return to see the parts that really intrigue me (the countries I’ve visited this year were only ever going to be side-notes to my child-borne dreams of seeing the Inca ruins in Peru).

Also this year was the first time I had done the whole trip solo. For at least part of all my previous trips, I have always travelled or met with at least one other person I know. Some people like the complete solace, but I’m not like that. If I’m ill or tired, I like that someone else can read the map or figure out what’s coming next. It’s teamwork and it’s enjoyable. For short bursts I can cope like that, but for three weeks, I’d have been pining for a break from it.

So it was all but inevitable that I would seek out others to travel with, and with the absence of any of my usual Grand Tour companions, I decided to travel with a group organised by Gap. It’s basically just transport, accommodation and a group of likeminded people thrown together (so it’s up to you what you actually do during the trip), and having experienced one before when I travelled in California, I knew and looked forward to what I was getting into.

And so with just ten days to go, the nurse stabbed me with the obligatory set of needles and I was ready to go. A stack of unread paperbacks were stuffed into my trusty rucksack (ten years old, and bound together with 35lb fish wire, but still reliable), a freshly bound moleskiene notebook and quite a lot of clothes that I really should get around to replacing also joined me.

To Buenos Aires I flew.

I’d already sampled a little Argentinean culture before. A few years ago I’d been lucky enough to drink maté and join in at a number of asados when a friend of mine was playing host to a couple of Argentinian visitors, but that had been the limit of my experience.

It was probably just as well I’d tried these things before, because we didn’t have much time in Buenos Aires (or ‘BA’ for short; a city I quickly came to like) and so I didn’t get a second chance to sample them again here.

I’d been collected from the airport by the immaculately dressed driver called Eduardo. In his seventies he wore a thin black suit, sported a thin grey moustache and flicked tobacco ash from the end of his thinly rolled cigarettes through the half-open car window. As he couldn’t speak a word of English, and my Spanish is limited to asking for beer, I just sat back and enjoyed the journey and his dangerous driving. Ah, at last, truly abroad once more.

BA itself was basking in sunshine when I arrived. I soon met my roommate Scott (or Reed if you believed his passport). Belfast-bred, tequila-infused and (as became quickly apparent) almost entirely nocturnal. The sort of person who is good to spend time in a bar with. We got on well, even if he did manage to out-drink me every night from this point on.

We meandered around the city until it was time to meet the rest of our travel companions. In total we were two Danish, a Dutch, a Kiwi, three Aussies, one Swede, three Germans, two English, a Welsh, an Irish, and our Argentinian tour leader, Juan. Everyone spoke English; no one spoke Spanish.

The next day a number of the girls and myself decided to explore the city (the other lads had already spent some time here). With just a day in this European-esque town, we opted to take a bus around to see the major sites.

Lunch had been at a Parisian-style street cafe, and being surrounded by six or so beautiful girls, it was quickly apparent that I looked like some kind of accidental pimp daddy; the group attracting a fair bit of attention from the passing traffic.

We boarded the tourist bus and ambled it’s way around the main sights like a lazy old dog. Once we disembarked at the vibrant La Boca district, we were pretty sure we weren’t going to be able to get back on again.

Juan had already warned us that patience in South America is not just a virtue, it’s an absolute necessity, and we quickly became acquainted with the concept.

Tango dancing, artwork, painted houses and the apparently dangerous neighbourhood around the Boca Juniors stadium entertained us for an hour or two until coldness set in and the group split up into bits. I remained with Jade and Katie to go and explore Recoletto (near the affluent Palermo district) to find where Eva Peron is buried, a cemetery that is apparently quite spectacularly crammed with ornate memorials.

Unfortunately we arrived too late to get inside, but the park right by was already awash with the Saturday evening crowd, who sat sipping at their matés accompanied by their dogs and friends, soaking in the live music and what was left of the setting sunshine.

Food that evening was our first chance to all get around a table together. Downstairs in a hostel basement we ate well and watched a couple of world cup rugby matches over beers and introductions.

It wasn’t a late night particularly, but an early start after drinks is only enjoyed by fools, and so the minibus journey to the ferry gave little time to sober up and recover.

Jade amused us all by routing around in another passenger’s bag (it was accidental) but once she’d finished, we hopped onto the ferry across the Rio de la Plata and into Uruguay for the first time.