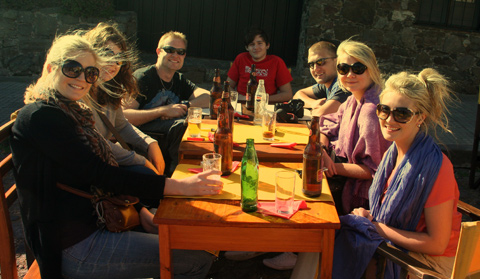 Our first destination in Uruguay was the pretty and historical port of Colonia. Once a smuggler’s haven, it’s quaint cobbled streets are now more suited to tourists bombing it around in half-broken beach buggies and golf carts, or at least that’s how things panned out when we turned up. The market was somewhat disappointing (if it was big enough to write Uruguay on it, it’s sold in that market), and so we found a bar and made that our base for a little while during the afternoon. The town and hotel itself was very nice.

That evening food was at a local restaurant, and it became quite a merry affair. Lubricated with alcohol, fussball, throwing games, dares and late night salsa dancing - it went down well. It also was the day that the wheels of the rumour mill began to turn.

The next and slightly hungover destination was Montevideo, the luxuriant capital of the famously cosmopolitan Uruguay.

It might be sensible to highlight that this last statement maybe include both flippancy and sarcasm. Although personally I enjoyed this bit of the trip, I would concede I found the grey buildings and drab beaches a little disappointing compared to some of the other locations we were lucky enough to visit. For some it was too much, and not ever since has Jade been able to reconcile her loathing of the place. But for all the negativity of the location, the highlights together as a group were excellent.

Stephen had become somewhat obsessed with balancing the zen of the hotel lobby, and the group took great pleasure rearranging the two stick-mounted fish ornaments in whatever way would cause the most discomfort for him at any given opportunity.

Lunch on the first day was traditional Uruguayan fayre - McDonalds - which might go someway to indicating the lack of interestingness in this aspect of their culture. The evening was spent at the cinema watching Bridesmaids. It’s the sort of town Montevideo is.

To be perfectly fair, by the next day when we rode on bikes around the city, the lunch offering had far improved - a Chivito - a traditional sandwich which is made by stuffing anything that is both edible and sandwich-sized between the hulking loaves. The bike tour was extensive; so much so that Matthew broke his saddle. Other than this, the highlight of the day by far was a visit to the grey monolithic bowl of the original football World Cup stadium.

Quite unbelievably, in the 1930s Uruguay had fielded the best football players in the world, and in two consecutive Olympics had sailed to magnificent gold medals (as the eight-minute video explained). As a consequence, they were the ideal choice as hosts, and Montevideo’s new stadium was the envy of the world. They even went on to crown their previous glories by being the first to win this new World Cup.

Now it’s a slightly faded relic, and feels much like all of the rest of the city; a reflection of a perhaps once interesting and vibrant time. It has has had seven or so decades to let the past glories fade away; and apparently has quite successfully achieved that feat.

The final evening here was in a cosy restaurant down by the old markets. We’d had a few primer drinks in Juan’s accommodation, and by the time food had arrived, Stephen had already committed to doing 100 shots in a 100 minutes. Now, Centurions were nothing new to most of the party, but even the most hardened drinkers don’t usually take on this task lightly, at dinner, or alone.

My meal was delicious; two slab-like pork steaks, swimming in a rich plum sauce and shoved up against a huge foil-wrapped portion of sweet potato mash. One of the first of the really great meals I was lucky enough to enjoy on the trip.

However, things weren’t looking so hot for Stephen by now. Unassumingly pole-axed by the task, he actually seemed quite happy and blissfully unaware of his own state. After declaring his love for most of us, making some fairly profound observations, then walking into a telephone box, it was decided he should return to the hotel.

Those who remained took to a local bar. There were cocktails, long measures, some shots and ultimately Scott, Katie and myself remained. The end of the night came when we were escorted from the premises; something to do with Scott rolling around on the floor in pain. Good times.

The following morning a new bus transferred us to our next destination, Salto.

Improved weather made the place pleasantly enjoyable. At evening time we were stuffed into a local restaurant “El Rancho” (I believe it means “The Ranch”) to fill ourselves with mountain-loads of grilled meat. This became a reoccurring theme as our travels progressed, and South America can be very enjoyable if you are a fan of eating animals.

The evening concluded with the world’s longest sustained game of ‘I Have Never’. As most of us had not played this since we were teenagers, it was a bit of a thrill, and incredibly revealing. I won’t ever manage to forget Jade, Scott’s and Sarah’s contributions. Never. Never ever.

The ‘waterpark or spa’ choice the next day was clearcut for most of us. The girls wanting pampering and paid to receive their (apparently) pervy massages, while us lads made the most of the four or so water slides and the “lazy river” at Salto’s best (only) aquatic attraction.

Incoming lightening storms closed some of the high-rides for a while, and the crazy golf had been shut down for still undisclosed reasons, but despite the limited options, good times were still possible. The red and black slide was definitely the best. The frog that joined us in the pool for a while might not have agreed.

We’d been warned that strikes on the Uruguayan/Argentinean border are not infrequent, and there was a good chance that if one occurred, we might be stranded for a few days until the dispute was resolved. Frustratingly news of such a strike had come that morning. We didn’t know until the end of the day that luck was on our side, and a long crisis had been averted. We were only delayed by an hour in the end.

On the way to the bus station, Jade had wrestled a CD from the taxi driver as a memento of the trip. She genuinely had enjoyed the music, so it was amusing when Juan later explained that the tunes in question were hot-favourites of the Uruguayan mafia, and pretty much unacceptably-awful to the ears of the rest of the population.

Now began our fast flip-flop like exploration of the border lands as we neared Iguassu Falls. Splitting Argentina from Brazil, there is no direct access from Uruguay, so the night bus would take us north on the Argentinian side. It would be a long slog, and although in comfortable conditions, it also proved to be the downfall of a number of members of our party.

The absolute cause is unknown, but over the coming days several people fell ill and it seemed the rather unsanitary onboard toilet facilities might have been a factor.

As we crossed into Brazil, we now moved into our third currency of the journey, and my pockets were awash with a mixture of peso shrapnel that no one would take or exchange. I still hadn’t managed to figure out the conversion rates, so it was all inconsequential to me anyway.