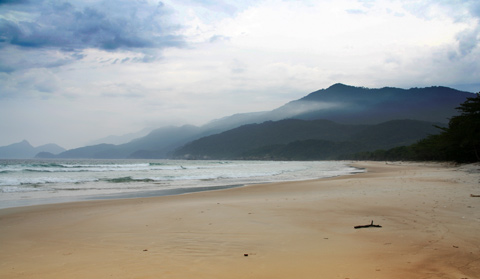 An 8.30am start, and another bus. This time to a port where we would catch an early afternoon ferry to Ilha Grande (or Big Island for the non-versed).

A sunny boat journey made for a pleasant trip (for all bar Scott, who isn’t so keen on watery expeditions) and the girls spread themselves over the bows to try and absorb up some precious vitamin D.

The pier stretches out from the main beach, and small shops line the sea front. With no cars (it’s a natural reserve) all transport is on foot or by boat.

We settled into our log cabins (complete with hammocks that were comfy but almost certainly constituted a fire hazard) and those who wanted to went off to do a preliminary trek into the island’s rainforest.

Monkeys, snakes, big ants etc - we trod the pink and red sandstone in and amongst the lush vegetation for a couple of hours before eventually emerging onto a beach where most of the sand ran mustard yellow, and just occasionally striped with thick, glistening cobalt-black bands.

When we arrived back at the hotel, the German girls were tucking into one of the peculiar highlights of this establishment. Each afternoon, a large soft home-baked cake, along with a box of teas and canteens of coffee and boiling water were brought out onto the veranda for everyone to dig in to. I spent some time in the hammock.

That evening we experienced the most bizarre of all food services to date. The waitress and waiter took orders for separate dishes, but stopped half way through the order and disappeared, later reappearing behind the bar with no explanation. Juan took matters into his own hands to prevent a disaster; and well over an hour later, the last of the meals arrived just as everyone else finished up.

In the intervening time, we traded riddles, including one about three rabbits, a river and a lion. We’re all pretty sure that one doesn’t even work.

The next day was meant to be the first of two days of relaxation and our own time. Once again, dogged by limited sunshine, we opted to hike across through the rainforest and land ourselves on the best beach which was on the other side of the island.

The going was fairly straightforward, but it was muggy in amongst the occasional burst of warm sunshine. We came across more monkeys, snakes, big ants etc. before finally escaping out onto the first of three beaches on our route.

When we reached the final beach the first thing I did was devour an ice-cold Coke from one of the hesky-vendors. It came complete with little icy crystal chips glittering all over the misty aluminium lid, and popped open with a crisp clank and smokey whisp. Perfect.

The beach was maybe fifty yards deep, but lined by palms and swept roundly uninterrupted for around two kilometres.

Us boys headed straight for the water and spent sometime wrestling waves and diving around like proper children. The girls hadn’t been so enthused by the saltwater, and spent their time sunning themselves.

That was until the rain began, and a group vote ruled to abandon play, so it saw us slip-slapping back over the melting red rock of the rainforest until we were back at the previous beach and able to jump on the first available boat back around to our side of the island.

The evening was another barbecue, to be shared with yet another Gap group who were heading in the other direction to us. We sat on the balcony sipping at our contraband vodka, and I did some reading for the first time this trip (Seven Pillars of Wisdom, T.E. Lawrence). Eventually we got into conversation with one or two of the other group, and then the cards came out, it soon bled into food time; we moved up to the covered area as the rain began to pour down.

It was snug under the covered area, with thirty hungry faces clamouring for hot dogs and steak.

The night went on.

When I awoke the next day, Scott wasn’t in the room. I’ll point out this wasn’t unusual being that he’s almost entirely a night time operator, so I wasn’t entirely surprised, but this was the first time he’d not arrived back before I’d actually got up. It wasn’t until I returned much later in the day that I found he’d spent the whole night on the beach drinking tequila, making friends with stray dogs, sleeping on canoes and ‘frolicking’ - of which the latter there is disturbing video evidence.

In the meanwhile me, and pretty much everyone else, had gone to take some time on a boat. The tour of the the islands best lagoons and beaches by sea really appealed and, it was really nice to finally dive into the azure waters and explore.

Anyone who knows me well knows that I can’t resist being out on the waves; and I don’t care how rough it gets. There is no greater pleasure than being on a boat, making slow progress, listening to Fat Freddy’s Drop or some other dub mix and soaking up the rays. Ok, so it could have been sunnier, but I was pretty much 95% of the way there.

So this was our last day in Ilha Grande, and also the final day with the German girls who were staying behind in hope of a few days of clear skies. The farewell dinner was punctuated with horrendously-coloured cocktails; partially a result of a game Caroline invented which bore two simple rules: 1. pick a cocktail 2. drink it. We eventually ended up at the local club, and the less said about it the better.