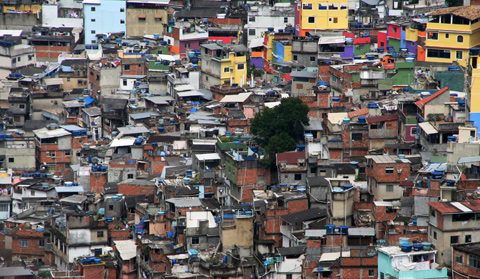 We parted after breakfast and took a damp ferry back to the mainland. Rio was an hour and half away, and by this stage most of us were trying to calculate if we were likely to see any good weather before our flights home.

Most people hedged their bets on doing the sightseeing stuff as far in the future as they could, but for me, Yvonne and Katie, we knew our options were limited as our departure was much sooner than many of the others.

Rio was overcast and sadly as wet as we had expected, so Yvonne took the last opportunity to take a city tour, while the rest of us ate a buffet lunch and rested until the evening.

Whereas last night had been our last meal all together, this supper marked the end of the tour. Juan outdid himself taking us to a traditional Brazilian eatery; one where your plates are filled with cut after cut of beef, shaved in great quantities from skewered joints that swarms of waiters deliver as they whisk around the tables.

The only way to stop your plate from overflowing is to flip over the small coloured disc you are given at the beginning of the meal (it would be impossible to clear your plate at the rate the meat arrives). Red means stop, green means go. It’s straightforward and you have to get pretty good at it pretty quickly. Iguana, chicken’s hearts... I was too full for any of the exotic stuff by the time we’d eaten sixteen other types of beef, including the one stuffed with cheese. They might as well just hand you a form to sign to agree to a heart attack.

The next day marked mine and Katie’s last day on the continent, and we were just relieved it wasn’t raining as we took our final opportunity to see Rio before flying home.

In the morning a number of the remaining party joined us on a tour of the largest favela in the city. I can’t say I had previously understood what this entailed, or what the safety implications of such a venture is, but our tour leader (Marcos) ranks amongst one of the best guides I’ve ever encountered (for any tour), and we all thoroughly enjoyed the experience.

From the base of the favela right up to the horizon (or mountain top) are densely stacked clusters of mostly orange-red house-boxes which squeeze in and amongst grey vertical columns that kind-of glue them together; each single unit a jumble of brick and concrete parts, that ascends and ascends, and eventually is cherry-topped with a big blue water pot, piled perilously atop the highest surface wide enough to hold it.

In the spaces between boxes, squiggly black cables stretch out each way like thick matted hair, and trail above the thin wobbly streets that snake in and out, under and above each other; as though Escher and Pollock had equal hand in the town planning. Where the cables stop, greenery pokes through wherever it can get enough room to find light.

Little cheery faces appear at various heights from windows, doorways and shops along the street yelling comments, questions and greetings - their perceived physical height bearing no relation to how tall or old they are, but entirely dependent on where the floor they stand on happens to be below them.

An elderly gentleman waves at us. He has an automatic weapon lying across his lap.

Being Street Number 1, you would be surprised perhaps to know that at it’s widest, the space between the buildings is perhaps just a meter and a half wide, and at it’s narrowest, just small enough for a dog followed by a child to scurry between your legs. And as the road winds down and down between the shattered terracotta brickwork, little stinking rivulets that flow across it from time to time, which connect little piles of trash left out to be picked apart by the curious chickens and kittens that jump about.

From Marcos’ advice about spotting the drug lords (“they wear pink uniforms, with little yellow flags and have ‘drug dealer’ printed across their backs”) to the furious pillioned motorcycle race up through the shanty town streets; from the kindness and enthusiasm of the local residents and business owners to the poignant physical reminders of the daily violence, drug running and gun crime pock-marked into the walls of many of the buildings - this was an exceptionally enjoyable and eye opening journey.

A good idea is to understand perspective of the Brazilians working on voluntary projects with the children and ordinary residents here. They believe that favela is a cultural existence as much as anything else - a common way of life for millions of Brazil’s residents.

It might be squalid (or at least have it’s roots in squalor), but it is also the normal everyday life for millions of people across the country. They point out that it might be called favela in Brazil, but it’s called ‘The Projects’ in the US. That’s not flippant - the same problems of drug and gun crime, lawlessness and fear or hatred of the police are endemic in both.

The priority and focus is to improve the lot and condition of the locals, but emphasise that the solution is not clearance of these vast illegal estates because the cultural melting pot here is so important and unique, that it actually defines some of the key physical fabrics of Brazil.

Yes, crime is the dark shadow that lurks, but for the majority of people here it is just one unfortunate facet of an existence we struggle to understand in the West, and when relative to the entire world’s vast population, is actually far closer to a “normal existence” than our own lives.

The favela had a big impact on me, and if you go to Rio, I urge you to visit one to try and understand why tourists are actually encouraged (and with surprising levels of safety) to come and help admonish any preconceptions about it being “zoo-like”. I found it enlightening.

It was now past midday, and time to say goodbye to many of our fellow travellers before embarking on the final leg of our city exploration.

Low cloud doesn’t make for the best viewing at the city’s famed high spots; namely Christ the Redeemer (sheet white views) or Sugar Loaf mountain (we didn’t even bother trying), but everything else was more than accessible and we still got some excellent views of the city from St Theresa.

The tiled steps of Selarón and the brutalist cathedral were our final stops. With just a matter of hours left before departure, we made the decision to at least get to the beach and walk it, albeit briefly and in torrential rain.

Luckily our hotel was in Copacabana (just one street behind the sea front), and although we decided not to venture as far as Ipanema, we finally got to see the famous view along the sandy shore of the Rio coastline.

I’m not going to say it was impressive in the wet cloud. It was damp and grey and long and sandy, but not impressive.

What I will say is that I fully intend on returning to both Rio de Janeiro and Buenos Aires again to see them for longer and in warmer weather; to really explore them both more thoroughly and to build upon the small tastes I received on this brief trip. Even though our time in both places was limited, I couldn’t help but really like these towns.

Next time, I also intend to ensure I get to enjoy the beaches a little more away from grey clouds and drab rains. Again, my passport is a little more full this year, and I’m already looking forward to coming back one day.