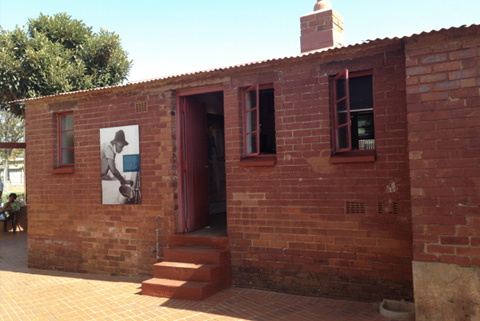 Departures at Malawi was tedious (I can see why Madonna got frustrated when she was downgraded here). The brand new biometric finger printing delayed us, and therefore the whole flight, being the only one due to depart that day. An hour and a bit later we eventually boarded the plane and made our way to Johannesburg.

On the plane, I ended up in a conversation with an interesting guy from the World Food Programme that meant I got no further into my still relatively neglected book, and we ended up swapping stories about Nepal all the way until we finally arrived at the carousels.

In Johannesburg, I had pre-booked two nights with Airbnb for a homestay in the Randberg suburb, and from the airport took the smart Gautrain (the G is pronounced as a gutteral ‘H’) across to Rosebank station where I was picked up by my two hosts. Symi, and her wife Ava made me incredibly welcome from the get go - and I was introduced to the menagerie of friendly dogs and cats in the house before being plied with South African food - teas, curry, ciders and wine. It was excellent.

They were incredibly accommodating and kindly arranged for me to be taken on a personal tour of the city the next day - a trip that I hoped could illuminate my incredibly poor understanding of South African history.

Before arriving I had no understanding of how the apartheid policies had arisen, or even how long it had been going on before it ended in the early 1990s. I was therefore incredibly grateful for the guide’s piquant choice of stopping off points, and I'd happily recommend any of them for anyone who wants a good and clear view of the past 150 years of SA history.

We stopped first in Sophiatown - the site of the first segregated 'removals' in the mid-1950s. Thousands were displaced, and their houses bulldozed before being forcibly transported to new government provided accommodation in the townships, such as the famous Soweto district (originally South West Township). Only two buildings in all of Sophiatown escaped the misery of the clearances, and one is the museum/gallery we visited - a house of a former President of the ANC in the 1940s.

Even more significantly the house was the site where a young Nelson Mandela and his ANC Youth League contemporaries visited in one occasion to try to persuade the then president to bless their campaign of governmental non-cooperation, but the young upstarts were eventually chased from the house, their plan rejected, and it would be sometime yet before they actively began their campaign of sabotage.

Sophiatown was eventually renamed 'Triompf' (Afrikaans, ironically meaning ‘Triumph’) and the old name has only recently been reintroduced to the area.

The next stop on my tour was Mandela's early family home. This style of traditional township house was initially a great improvement for many of the black and displaced populations who had come from slums, and they were all were built to very similar specifications, with running water and other modern amenities. However, over time the gloss wore off these simple buildings and these once practical houses began to show their age quickly.

The current incarnation of the building as a museum unfortunately is not really much of a worthwhile experience. Other than the four external walls, the interior has been completely removed and the contents are almost entirely banal awards and diplomas awarded by various institutions. I'm pretty sure Madiba (as he is colloquially and affectionately known here) wouldn't recognise the place as the house he'd once inhabited, and although worth a short visit simply for context, it would be the only place I'd have sacrificed in lieu of other, better sights in Johannesburg.

The next stop marked another poignant moment in apartheid history. Hector Pieterson was a thirteen year old schoolboy, shot in the midst of protests by predominantly black students in the mid-1970s over the introduction of an ill-considered policy of compulsory education in Afrikaans. The overnight introduction of this blanket policy was the start of much friction between the government and the student bodies who suddenly were adversely affected on account that the vast majority were not Afrikaans literate.

The policy was eventually overturned, but not before Pieterson and several other hundreds school children had died in widespread violence in the townships. Today a large museum and memorial stands on the site of the shooting and provides an excellent, modern insight into the various troubled relationships between the communities and government during that era.

Soweto today is a sprawling city that is bigger than Johannesburg itself. The bizarre world of the township is still incredibly self-evident here. Township houses vary in shape and size, but many I saw are grouped in barbed-wired topped concrete pens, split apart from each other by the intersection of major roadways or rivers. Some of the less affluent townships now overflow so that squat amongst the reeds, others under flyovers, and in Soweto, arranged in row after row after row.

Some townships are in relatively good repair - ownership rights were granted on the dissolution of apartheid - and so some are looked after well, but for those in squeezed areas and poorer districts, they are all but hovels and other rudimentary tin and timber structures have been built within the gaps.

I didn't see the worst of the townships - what was visible from the roads in the most part was fairly neat, but you do get the occasional glimpse through the razor wire or through a missing concrete slab in a graffiti-riddled wall. There is also danger here - not that I was exposed to any - but it was repeated to me a few times that you don't stop at red lights after dark in Johannesburg, nor do you drive with your windows fully up (it stiffens the glass which makes it an easier task to smash with a crowbar at an intersection). Security (like everywhere I've been in Africa) is a massive concern of daily life, and every brick built house squats in a concrete or iron-fenced compound, and comes with a big board showing which particular company will provide the armed response. It's quite a strange sight for European eyes.

That afternoon I found myself standing atop the Oppenheimer tower, a modest round rough yellow brick lookout, from where can see the Soweto township flow out in all directions. The local guide lives off the tips from the tourists he takes up here, and so I was incredibly surprised to discover in our conversation that he had once worked on a collaboration with the Birmingham Royal Ballet about fifteen years earlier. With some regret, he explained to me it had all come to an end when the various organisers moved on.

The tower we stood on had been built to commemorate the founder of townships, who had come up with the idea sometime in the C19th. Although any additional facts about it were scarce, it seemed the original purpose of the townships had simply been to provide better accommodation for the slum-living poor and expanding population of gold rush Johannesburg.

And if the tower was testament to an old vision of the city, the Soweto Theatre is testament to the new, vibrant (and even slick) side of the township’s development. Although not entirely convinced we had permission to visit, my guide was relentless (and I think she wanted to see it herself) and it was probably the most beautiful new performance space I've seen anywhere. Really.

It's quite quirky architecturally - a huge glass lobby with tiered walkways stretching between three giant, fused candy cubes that contain the variously sized performance spaces. One of the girls on the front desk was kind enough to agree to give us a quick tour. It wasn't a long stop, but it was fascinating to see some bold social architecture going up in the district.

My final stop of the day was the most important for me - the Apartheid Museum. This huge complex is set in beautiful grounds with views over the city and in a beautiful modern building. Cleverly, you are arbitrarily assigned a "white" or "non-white" ticket, which is a simple and brilliant way of instantly generating empathy before you even enter the turnstiles - and it does have a physical bearing on your journey through the museum.

The place is vast - I got there early afternoon and just about managed to get around the whole thing before it closed at 5pm, but I did have to rush the last part. I also skipped a couple of scene setting videos - however I can't express how much I would recommend this place if you are in Johannesburg - it's packed with easy to follow displays (cleverly designed so you can skim the head notes, or read in great detail if you choose) and some impressive exhibits.

The only thing that didn't work was for some reason they had slammed a temporary Mandela exhibition in the early part of the museum (this alone took me an hour or so) but I think was only there because they couldn't find space to locate it anywhere else, yet it really disrupted the flow and I had to walk 100m back on myself to rejoin the main exhibition which was still talking about the nineteenth century, so it didn't quite gel. It wasn't that it wasn't a good exhibit, it was just oddly organised.

We drove back through more townships as the sun set, and by the time is returned there was a vast "braii" (South African BBQ) on the go, stacked with ribs, sausage and chicken. It was a truly incredible experience.

Symi and Ava had also been kind enough to help me gather a series of South African delicacies that Sian had demanded I tried while I was in the country. I tried Koeksister, malva pudding, bean banana salad, wet billtong, some kind of lychee juice and Fanta grape. All enjoyable new experiences.

But that was about it for Johannesburg. That evening I left the girls and headed for my next meeting point - a hotel where I would meet the rest of the traveling party for the next leg of my journey through Botswana and into Zambia.

This post was first published on Wed Jun 12 2013 originally on justbeyondthebridge.co.uk, my former personal blog