This article was written 5 years ago in 2015, so I ask you not to judge the writing of my youth too harshly! The text is as it was originally published. 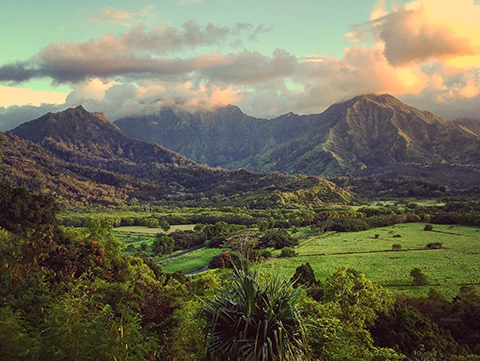 Under spinning fan blades and wedged-in shoulder-to-shoulder, the four of us sat with day-glow spoons and plucked frozen chunks of pineapple out a of thick coconut ice cream. The sun beat down fiercely on the drop-tops and pickups through the window  – but – with ice-in-hand, we didn’t really care about the heat out there. Inside that wooden shack, it was super cool.

This was Pink’s, Hanalei town’s small ice creamery. We found it after dinner the first evening we arrived on Kauai, and by the end of day two on this, the ‘garden island’ we had become their most frequent, loyal customers. We knew all the staff.

Between the sittings here, we pitched-up on a slim beach that glows behind the tufts of palms and ocean-view villas. Just a three or four minute lazy stroll from our own place. We rescued a clutch of body boards from beneath the stilts of the villa, and occasionally slunk in-and-out the water, catching the odd small wave here-or-there whenever the Pacific could be bothered to spin one up.

The surf wasn’t the vivid transparent turquoise of Oah’u’s southern coast. Instead teal and sand-laden wave crests would rear up and shed thousands of white-crystal needles, collapse onto the sand, and bubble into the big, pacific blue.

Our villa, like our neighbours’ houses, sat around a smooth pancake of tarmac at the end of a short road  – called Papio. Opposite us, great white waterfalls rushed down rivulets in the volcanic face of the blackened mountains in the eye-line of our porch. Between here and there was little else than green, crumpled-velvet foothills, an occasional tin roof, and the grand billowing white, blue and red stripes of our neighbours’ Hawaiian jack. Bursts of white cotton cloud dabbed the uppermost peaks of the mountains; the rest of the sky a steady cobalt blue.

Clacking myna birds paused on the lanai balustrade from time to time. With their heads cocked to one side, they would let the sun soak into into their bright yellow chests, and with each skip or jump, flicked their black tail plumes upwards and let them fall back slowly into place in a single, graceful dip.

Expensive hotels nestled around the end of a golf course in the next bay, but if you carried on a little beyond that, and ventured down past the luxury apartments and down a leafy and red-earth path to the waters edge, you stepped out on top of a huge slab of glossy black lava called Queen’s Bath.

The wet, salty rock pools wriggled with fish and crabs, and you had to negotiate the rough edges with deft foot work. Cliffs lined huge foaming pools where the bravest divers flung themselves into screwball waters whilst their dogs bark excitedly and pace back and forth. The curious snout of a sea turtle occasionally bobbed up through the wash.

In the fading pinks and yellows lights of the evening, the larger rock pools reflected the subtle skies like huge black mirrors, upset by the odd thunderous wave that overspilt the rocky ocean piles. Staring directly down into the waters, the view was glassy, liquid and clear, and the whiteness of the giant pearly boulders that lined the base glowed just enough to give you a sense of the depth. You could plunge in head first and yet never get anywhere near to the bottom.

This post was first published on Sat Aug 15 2015 originally on justbeyondthebridge.co.uk, my former personal blog