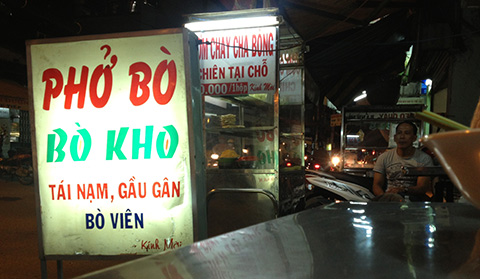 I woke late to a breakfast of eggs, a swim and then we travelled back to Ho Chi Minh city, only stopping en route to meet another of George's friend's - Aileen, in yet another coffee shop.

The afternoon was spent working back through photos, then later that evening George and I grabbed the bike and took to Bui Vien (the equivalent of Thailand's Koh San road I guess) where we sat out and soaked up the hustle of the city at night with yet more new faces - Mac and Anh.

When beer is served in Vietnam, is it done over a thick slab of ice. The glasses are often like traditional glass tankards, but filled with the pale fizz of Saigon Red or Green, and floating in each, a huge crystal iceberg. Alongside, Bui Vien provides an astonish array of 'pub snacks' - the most common being dried jellyfish (which is about the only thing I didn't like) and slices of a hard Cambodian mango, dipped in chilli powder mix.

We'd booked Wednesday to do the first significantly cultural trip of my time in Vietnam - a coach trip to the Cu Chi tunnels, and site of a great organised resistance against American ground forces for around a decade during the war.

My knowledge of the conflict was woeful before I visited, but it was something I wanted to know more about.

Cu Chi is a labyrinth of underground tunnels that were constructed by six neighbouring villages in the early stages of the war, and were an elaborate display of extreme survival and often horrific ingenuity.

The safeguards put in place to protect the tunnels often relied on repurposing un-detonated American ordinance in booby traps, but at least many of those were quick ways "to go". The more 'traditional' traps were far less appealing, and in many cases if you accidentally stepped on the wrong patch of earth or entered the building you were going to be impaled on sharpened bamboo or 9-inch nails, before being lacerated by the secondary "features". Some pretty goring ways to go.

Bowling through the tunnels itself is good fun but not for the claustrophobic. The strong, clay-steeped earth requires no additional structure to create warrens, but in the most part they are less than 3 foot high, and 2 foot wide, in pitched blackness, stuffed with hot, wet air - and the inevitable consequence that you rub your back and arms up against the dampish walls means you pop out a breathless, red-dusted, sweaty mess.

Part of the Cu Chi experience that is intriguingly evocative is the constant, clear, sound of heavy gunfire. Anywhere else in the world this would be an unsettling distorted facsimile played over loudspeakers, but this is 'Nam, and for the price of a cinema ticket at the end of your visit you can load up an M-16 and let it rip into a big stack of churned up earth.

Naturally, they don't just hand these things over to the tourists. It's run by military personnel, and the guns are strapped to the wall to stop anyone getting a bit too gung ho, but having fired both shotguns and various rifles in the past, the impact of the recoil of these automatic weapons is an incredible sensation and in reality, pretty horrifying.

Once back in Ho Chi Minh I spent the next two days occupying myself with reading, sorting photos and resting in the hammock. I visited the War Remnants Museum, a fascinating collection of artefacts and stories, and although quite clearly visited by westerners, no Americans in sight.

This might sound obvious, but actually the Vietnamese don't seem to be embittered by the presence of the Americans, and if anything the US visitors we did encounter seemed somewhat humble in the most part. It's perhaps testament to the success of the reintroduction of full diplomatic relations in 1995 .

The museum is also surprisingly matter of fact. Whole truth or not, it is clear that incredible atrocities were levelled upon the Viet population during those years, but there is no sense of glorious victory presented here. Actually very little emphasis is dedicated to the final days of the war and how it ended with the American retreat.

The most potent part of the display though was on the top floor. A photographic exhibition following twenty or so photo-journalists through the war (from both sides) and a fascinating yet often poignant chart of events.

From the 'classic' LIFE images of US troops heading out, to the shocking images of the human consequence of war, it was often moving. You watch in shock as you go from a field photo of soldiers in action, to a photo of the same photographer taken in just seconds after; yet now she lies curled up under the crouched figure of an army chaplain administering the last rites. It's just one of handful of tragic personal stories presented alongside their images.

I would highly recommend it, but it's important to remember many places in Vietnam close for lunch at twelve, so unless you are willing to wait for an hour and a half, it's much better to get there before 10am if you intend to view the whole museum without being unceremoniously booted out!

And so my time in Vietnam was drawing to a close. Friday evening was to be my last experience, and George had suggested we go for food at the famous "Black Cat". This quirky little joint is tucked just on the edge of the city near the water and serves absolutely an excellent burger and A&W root beer. The perfect way to round off three weeks of sheer enjoyment.

Mac happened to be on the same flight as me back to Manchester, but despite our best efforts, we failed to secure the upgrade we'd bean teased that we would get by the check-in staff. So from there on in, it was just a 14 hour journey via Dubai back to the wonderful clear blue skies of the UK, and an astonishingly cold 0ºC temperature, for which I was most certainly not dressed or prepared.

And so the question pops into my head once more. Where next?