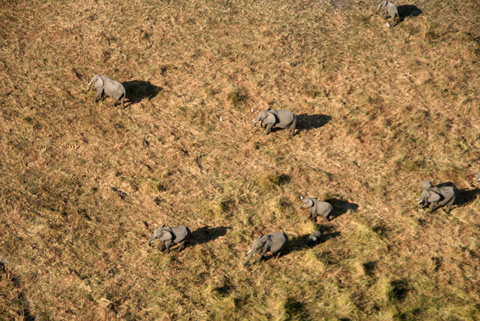 Our progress into central Botswana took us into the Kalahari desert, a huge dry expanse that overlaps Namibia and South Africa (very much sandier than I had seen elsewhere in Africa), and we were able to spend a little time on the edge of the giant salt flats - pure white, dusty sheets that seem to glow like a giant light table directly below the blue skies - providing an incredible contrast. I’d seen photos of salt flats in Bolivia and they looked stunning, but I hadn’t expected to see them here, and so was pleasantly surprised to experience them first hand.

We arrived in Maun that evening - a town on the edge of one of the most highly anticipated locations of the trip - the incredibly wildlife rich Okavango Delta.

The delta is a tectonic trough in the basin of the Kalahari, and quite bizarrely is the natural end of a series of rivers, yet is completely isolated from the sea or any other large body of water. The rivers simply flow into the flat expanses of the delta and evaporate or drain away underground.

It’s an incredible place - huge flatlands populated by stunning wild animals and relatively unpopulated for it’s swampy nature. And the best way to see this all is by plane, which is what we did next.

The ‘international’ airport in Maun is a one-eyed place, and as far as I could tell we were the only people there actually wanting to catch a flight. In fact there was some confusion on the tarmac as to which plane we were meant to get into, but once that was all sorted out our little Cessna took off, my first time in such a small (six seater) propeller aircraft.

It was both enjoyable and beautiful. Flying low and straight, the lush green grasses and trees are punctuated with deep blue pools and shining rivulets for miles in all directions, and the evening sun cast long shadows across the delta. The yellow sandy scrublands provides the ideal contrast for spotting the large herds of elephants and wildebeest, and the pilot repeatedly dropped one wing or the other in order that we had a near perpendicular (and stomach lurching) view of the crowded banks of wildlife.

The flight was an hour in total and despite my worries that my camera was no longer up to the job of long distance photography, I was really pleased with the images I managed to collect.

That evening provided one welcome respite for me. For everything positive about my African journey so far, the one thing I hadn’t realised until this point was that I had had almost no time entirely to myself. When activities are always arranged in groups, you travel together, and you are sharing a tent, it actually can be quite draining - and that evening I finally found myself alone with an ice cold Coca-Cola at the bar and completely indulged in the solace. I realised it was the first time in probably a week that I’d had enjoyed isolation.

Later that evening the group convened in the bar together to play get to know each other better. Although we’d been travelling for a few days now, the nature of these things is that you tend not to get a chance to speak to absolutely everyone socially until a few days in, so it was a good evening to learn the remaining names of the group.

This post was first published on Thu Jun 13 2013 originally on justbeyondthebridge.co.uk, my former personal blog