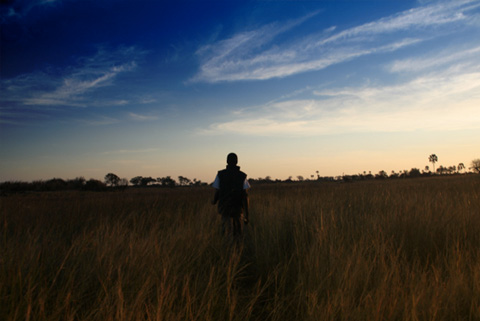 The next morning we boarded a shallow bottomed boat from the edge our our camp ground and took a brisk high speed journey through the grasslands of the delta to a landing point where dozens of local ‘pollers’ were on the banks hurriedly loading gear into their small dug out canoes.

The waters here are home to crocodiles, and en-route we were lucky enough to spot a number of smaller ones peering up from the clear waters, and notably are remarkably cute bearing in mind they’ll take your arm off in an instant.

We were assigned in pairs to a ‘mokoro’ canoe and so began two hours of completely blissful rest, gliding silently through the lilies, birdlife and tall reeds of the Okavango. The log dug outs were thankfully waterproof, and we’d been propped up on pillows made out of our kit bags and lying on the sleeping mats we’d brought from the tents. It was a real highlight for me - being pushed along by the local boatsmen and women using a three yard stick in our narrow canoes and basking in the warmth of the early morning sun.

Our destination was an island in the middle of the delta - this was not a civilised location - it was for all intents and purposes a true bush camp and there was a real risk of large game wildlife around us.

The toilet was a spade and a short walk out of the camp, and due to the nature of our location, the firm instruction was that no one was to go unaccompanied - and that after dusk a head torch should be used to check for the reflections of the eyes of any curious beasts beforehand - which made it all the more exciting...

The early part of the day was spent erecting tents in what soon became baking heat, and then we were giving the opportunity to try out polling the boats for ourselves. This proved to be good fun - at least in the downstream direction - however I seemed to have some issues getting the thing turned around and back up towards camp. Eventually we abandoned the boats and just cooled off in the beautiful freshwater.

That evening we were lead on a bush walk out into the centre of the island by our guide, called Labour. As an aside there were some other absolutely fantastic names I came across over the three week trip, two of the best being Moonlight and Office.

The walk was proving to be a relative failure, and we didn’t manage to spot anything until, just as the sun really began to fall low in the sky and we spotted a heard of zebra and wildebeast. On it’s own this might have been less spectacular, but they were caught between us, the treeline behind them, and the setting sun behind that. Something triggered them to stampede, and we left with the stunning view of the sun’s red glowing bauble in amongst the silhouette of the tall bowing palms and dozens of charging animals flowing from billowing clouds of orange dust.

Back at camp and after nightfall, the pollers performed a number of traditional Chechewan songs for us - an absolutely haunting experience - the harmonies and vocal sounds are absolutely captivating and it was a fantastic piece of local culture that I will remember for a long time.

This post was first published on Thu Jun 13 2013 originally on justbeyondthebridge.co.uk, my former personal blog