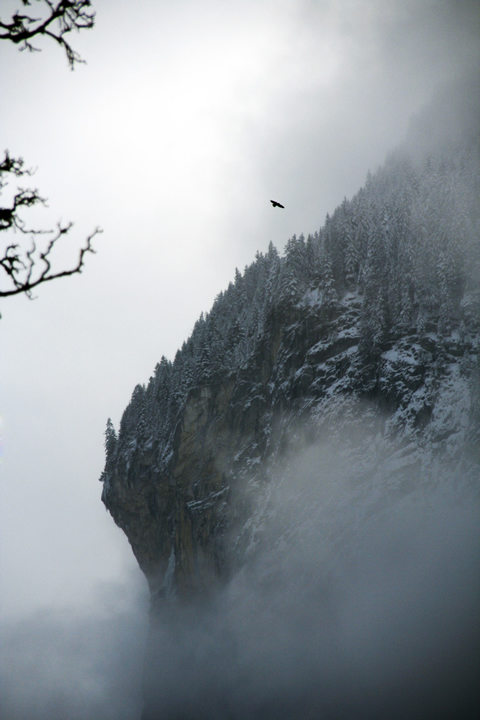 I've wanted to visit Switzerland for a long time. Of all the western European nations, it's one of the most interesting politically, historically and scenically and so I was really pleased when James (who I tend to do photography trips with) decided he'd like to try it too.

I gave myself the week off and we flew from Luton on a bitter Sunday morning, and were more than relieved that despite the temperature in Geneva, the weather was crisper; less sleety and less wet.

We spent the next few days as the only residents of a hotel in Interlaken (quite literally, even the staff weren't on-site most of the time) and took time to explore Murren, Thun, Wengen and number of other mountainside/lakeside villages. Ski season hasn't yet commenced, but the first snow is falling, which made for ideal photography conditions - unspoilt slopes, no overcrowding and complete isolation in some cases. On a couple of occasions we ended up in normally buzzing villages only to find that most of the transportation wasn't running, let alone anyone else in sight. It was highlighted by the fact in the five or so days I was away I didn't have a single opportunity to speak to anyone who wasn't Swiss.

Limited German and French didn't matter much as most people speak English, but I actually enjoy the challenge and being the only other two languages I have any knowledge of, meant I got to try both.

The highlight of Interlaken was definitely heading up to the Jungfraujoch - 3471 metres. Stupidly, despite my own interest in the mountain and it's conquest, it had completely escaped me that the Eiger (especially the White Spider, or famous North Face) was actually in the immediate group of three mountains ahead of us. It really was stunning. The weather had been snowy and cloudy below about 2000m, but from the railway station at Kleine Scheidegg, looking up at the three mountains, we had exceptionally good visibility.

It's expensive in Switzerland, but Swiss Pass railway passes halved the price on the few lines that aren't 'all inclusive'. You could feel the altitude, although it wasn't anything like Tibet (where dizziness turned into a splitting headache), and instead made the whole experience even more surreal. Outside on the plateau the temperature was a chilling -18.8°C but it made a great platform for taking photographs. The only downside of these pre-prepared spaces is that everyone gets the same image - but unfortunately there is little other option at that sort of height without a helicopter and money to burn.

On Wednesday we returned to Geneva and had a chance to have a look around the Old Town, not before James took the hotel's rooms to pieces (critically, not literally). As someone who designs them for a living he was able to point out some pretty clever cost saving techniques that you wouldn't necessarily have considered before.

Historically of course, Geneva has an important role to play in both the League of Nations and the UN, and it was interesting to step in the same footsteps as some of the greatest world leaders. Inter-war European relations was one of my pet topics until A-Level and it really puts things into perspective when you see the rooms from where Haile Selassie made his impassioned plea and where the Geneva Convention was first signed in the Alabama Room at the Hotel de Ville. All good history stuff.

After getting back in time for Saturday's rugby, I caught the train to meet with Sean before the match. I don't think we expected too much from England's performance, but after a fairly stale first half against the All Blacks (6-12), the second half could have provided a surprise result. It did, and we lost spectacularly.

Actually it wasn't all bad, but some pretty awful discipline left us playing with 14 men for most of the game, and some lazy play and lazy kicking meant we we're pretty stuffed.

When I got back at around 11pm I was surprised to find myself in the car heading over to Kidderminster to meet up with George, Tom and Gaz for a celebratory drink (George getting back from Canada). We ended up in a lock-in I think because the beer was still flowing until the early hours, but I had the benefit of a fantastically comfy spare bed and didn't wake up until midday.

A good week off, all-in-all. Photos are here.